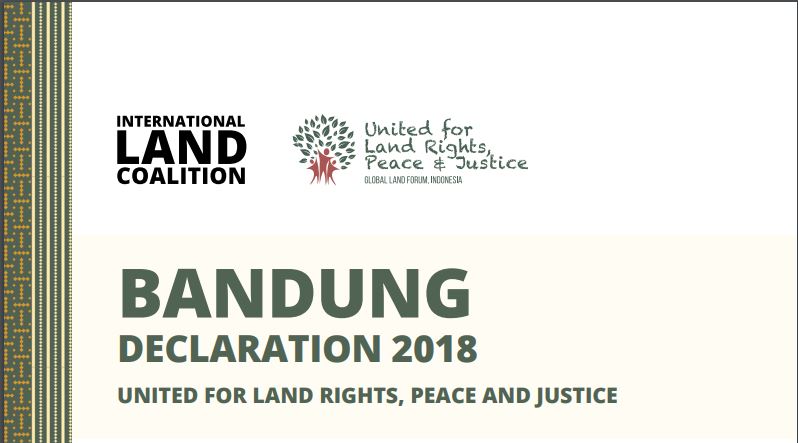 The International Land Coalition (ILC), Assembly of Members on 27 September 2018, adopted The Bandung Declaration 2018 United For Land Rights, Peace And Justice. The declaration followed the 2018 Global Land Forum hosted by the Government of the Republic of Indonesia and the Global Land Forum National Organizing Committee.

Despite the diversity and the different approaches of the members of the assembly made up of 250 organizations from over 77 countries, the members came together with a mission to build people-centered land governance.

Since the last Global Land Forum in Senegal in 2015, members noted that socio-economic inequality has become acute with the levels in many of the member countries, becoming unjust and unsustainable. Control over land and other natural resources remains in the hands of a few. Additionally, land degradation, land conflict and corruption continue to be major challenges while laws and practices are slow to change and these give equal land rights for youth and women.

Members agreed that delivering the Sustainable Development Goals and the shared of goal of ‘leave no one behind’, will now depend on the commitment and readiness of all stakeholders, to fundamentally transform the systems that promote this inequality and injustice. This commitment was broken down by members into two particular issues which will now form the basis of their global action: 1) the protection for land, and environmental defenders and 2) Agrarian reform.

Finally, to tackle these issues and best deliver on their joint mission, members also realized that they need to work differently as a coalition. Thus they left Bandung having pledged to eleven commitments for improved collaboration and commitment to change – which you can read about in the Bandung Declaration 2018, United For Land Rights, Peace And Justice