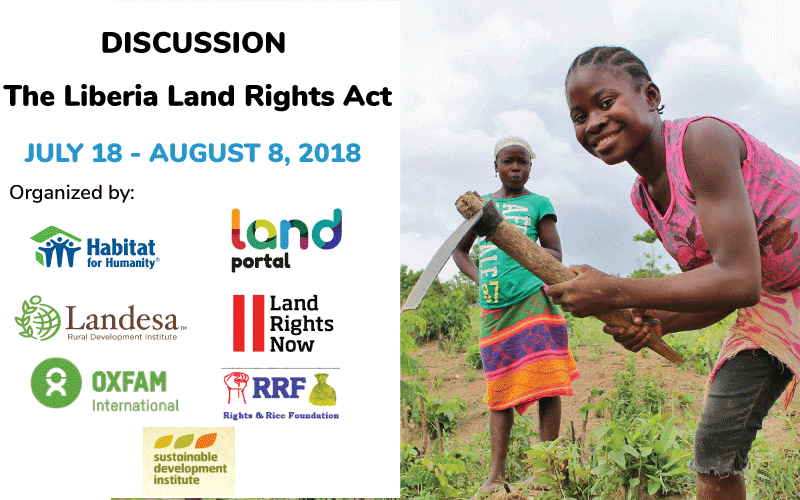 The Sustainable Development Institute (SDI), Landesa , and the Land Portal Foundation are co-facilitating an online discussion on Liberia’s Land Rights Bill (LRB) that may soon be voted on by the Liberian National Legislature.

This discussion is also supported by Rights & Rice Foundation, Habitat for Humanity International, Oxfam, and the Land Rights Now campaign.

The discussion will run from July 18- August 8. You can participate by  Registering as a Land Portal user and submit your contribution.

Liberia has not yet enacted a comprehensive land law. According to existing laws, all lands not previously deeded to a private party are classified as Public Land. Since the end of  civil war, Liberia’s struggle to enact a land law, coupled with its weak land and natural resources management systems, contributed to tenure insecurity and an increased rate of large-scale land concessions to private investors.

In an attempt to address this issue, the Liberian government started a land reform process in 2009 with the establishment of a Land Commission. In May of 2013, the Land Commission presented a draft Land Rights Policy (LRP) to the President. This draft was officially adopted by a diverse group of Liberians, including government officials, traditional chiefs, community members, and civil society organizations. Following the validation of the Land Rights Policy in 2013, the Land Commission drafted a Land Rights Bill designed to provide a legal framework to implement the LRP. A key provision in the LRB defines four main categories of tenure in Liberia: Private Land, Customary Land, Government Land and Public Land. This provision has strong implications for the millions of rural Liberians  who currently do not have formalized land rights.

Since 2013, the Legislature has conducted multiple private and public consultations and public hearings. These interventions resulted in significant changes to the LRB. In 2017, a version of the Bill was passed by the House of Representatives. However, according to Liberian Civil Society, the version passed by the House is a dramatic departure from the LRP and significantly waters down provisions designed to protect customary land rights. Many civil society organizations in Liberia are working tirelessly to ensure the LRB is revised so as to safeguard customary land rights. At the international level, the Land Rights Now .campaign recently published an issue brief  with several recommendations for reforming the LRB.

The overall objectives of this online discussion are to:

Findings from the discussion can contribute to the development of an adequate regulatory framework for safeguarding communities, groups, and individuals with customary tenure rights.

The discussion will focus on the following questions:

1. Recognition of Customary Land Rights for All: What do you think about the entitlement of one acre in fee simple (deeded land in customary residential areas) for each member of a community? Should customary land be sold?

4. Protected Areas: How should the government reconcile the issue of customary land rights in protected areas?

5. Existing Concessions and other land grants:  With a large land area in the country (mostly Customary Land) already granted through concessions, what should be the role of communities in the renegotiation of concessions?

Webinar: Bridging the Gap on Land Governance and Tenure along the Urban-Rural Continuum
WATCH: Securing Land Tenure Security through Community Mapping in Kenya