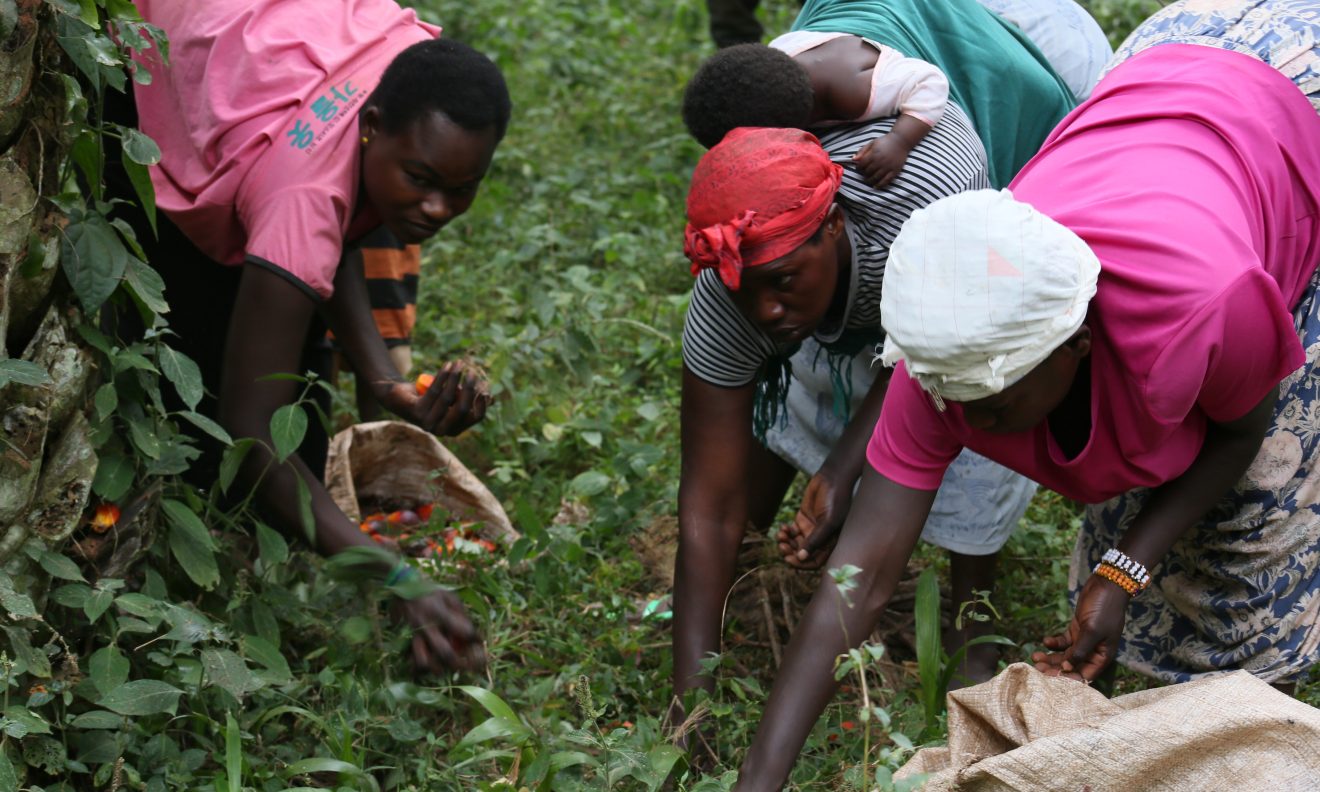 In Kalangala District of Bugala Islands, Margaret Nansubbugga, a smallholder oil palm farmer narrates how she has faced numerous hurdles to guarantee her productive use of her oil palm garden. “Since my husband passed on I have remained unprotected in my use of the garden. He is the one who dealt with the kibanja owner of the land I am using now,” she says, “…unfortunately; both he and the owner are no longer there and that is where my problems with the farming land started”, she continues, “…the owner’s children had threated to evict me from this piece of land on numerous occasions”

This is one of the many experiences shared by women across the island. Picking from the history of the island, most of the current inhabitants of the island were small scale fisher men and migrant charcoal producers and may be essentially men as women would be in the service industry providing essential services for the migrant workers who later settled in the island. The migrants did not own the pieces of land where they were farming thereby presenting a huge challenge being that oil palm is a perennial, long-term crop that requires huge farmer investment at the beginning and it takes up to 25 years to get to optimal commercial production.

The Vegetable Oil Development Project’s farmer trust, Kalangala Oil Palm Growers Trust (KOPGT) and the oil palm farmer leaders have been handling many land related cases where absentee landlords on mailo and kibanja tenure emerge and claim their land threatening to evict some farmers. The application of GLTN land tools including the Participatory Enumerations, Gender Evaluation Criteria and the Social Tenure Domain Model, within a Continuum of Land Rights approach has supported recording of smallholder claims and interest on land thus useful in arbitration of the emerging land disputes through mapping of the land by the farmers witnessed by their communities, recording the sizes as well as their GPS coordinates and issuing land (garden) certificates.

“From my involvement in the training at KOPGT and subsequent mapping on my garden has helped in recording the actual size of this piece of land, providing reliable documentation for KOPGT to support in the mediation with the owners thereafter,” declares Margaret.

The garden certificates have been able to give comfort to the smallholder farmers in terms of documenting their investments and relationship with the gardens while also documenting the relationship the absentee landlords have with their parcels of land; as a result, empowering both the smallholder farmers and the absentee landlords to negotiate from this understanding.

Further afield in Kenya, a similar approach of geospatially enumerating private and communally shared resources has been implemented within the SDCP intervention sites in Dairy Centralization Areas 1, 2 and 3 of Bomet County. Highlighting their context specific land and natural resource tenure security challenges, women within the DCAs noted very unique land and natural resource tenure issues of user access and control over communal resources due to a changing geographical terrain.

“The target Dairy Centralization Area (DCA) 1 in the low lands of Bomet remarkably differs from Highland Dairy Centralization Areas (DCA) 2 and 3 not only because of the major changes in land tenure arrangements from the communal tenure to individual ownership, with subsequent problems of plot fencing, diminished grazing areas, but also the change from extensive dairy farming of primarily semi- zero grazing to intensive zero grazing practices,” said Faith Tanui, a dairy farmer leader in Sugurmerga, “…consequently there is limited land and natural resources across board with difference in the tenure arrangements. Women are predominantly excluded in terms of user access to and control over of the more privatized at family level. In contrast, the communally shared have been misused, abandoned in some cases and encroached such that water and pasture which dairy production relies on is very scarce.”

Recalling the evident water resource challenge vividly, Agnes Towett, one of SDCP’s dairy farmers noted that, “I used to carry water in 20 liter containers from the communal water points to cater for the eight cows in our farm. The nearest water spring is at least 6 kilometers to and from my farm…this does not include water for our domestic use. Each dairy unit including the cow requires at least 40 liters in a day; as such we require at least 320 liters per day”

While implementing the use of GLTN land tools in both target project sites, very practical and inclusive actions were taken by project teams and the smallholder farmers who led the way in addressing these challenges through utilizing GLTN tools. Given women’s roles in agricultural production and water resource management, environmental degradation of soil, water and the natural resource base has a direct, negative impact on women and the families they support. Evidence shows that integrating a gender perspective into development programs can improve program outcomes and increase equality between girls and boys and between women and men.

Both in Bomet and Kalangala, women were specifically engaged due the land and natural resource challenges they grapple with every day. The land information database and management systems are being finalised with just about 670 and 330 women documented in Kalangala and Bomet respectively. The database will support the smallholder farmer women in not only providing the extension services but also supporting their claims, interests and small scale investments on land. The resultant STDM database to be hosted by SDCP Bomet and VODP/KOPGT will be able to produce maps showing the location of all the smallholder farmers, their garden boundaries and provide information on their tenure situation that will facilitate their field operations. Both IFAD supported projects will use the LIMS database to manage, update and use for operations, including issuance of simple garden certificates in Kalangala and facilitate communal resource management in Bomet.

These interventions are implemented under the Land and Natural Resources Tenure Security Learning Initiative for East and Southern Africa (TSLI-ESA) a regional project jointly implemented by GLTN and IFAD as a key intervention to strengthen efforts on identifying and addressing land and natural resources tenure security issues in IFAD supported projects in selected countries in ESA. The overall goal of the programme is to contribute to the development and integration of pro-poor tools and approaches for securing land and natural resource rights into development programmes in selected countries in Eastern and Southern Africa (ESA). By integrating pro-poor and gender-responsive land documentation tools, TSLI-ESA strengthens the rights of poor communities in IFAD-supported projects to land and natural resources and the revenue streams linked to those rights.