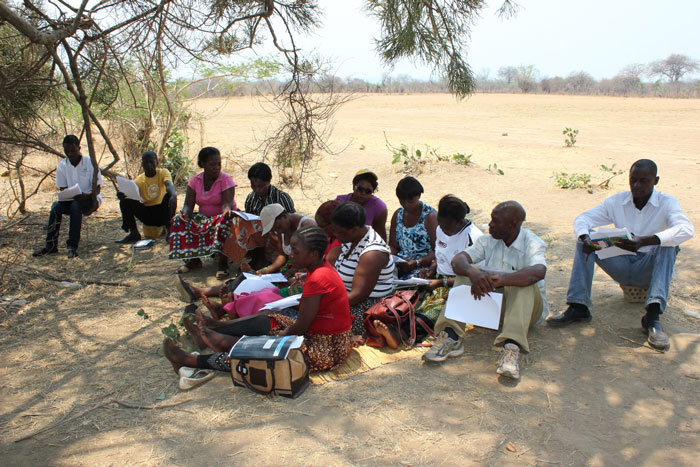 A second Social Tenure Domain Model (STDM) training and planning workshop with the Mungule community in Zambia was held from 28 September to 2 October 2014 to pursue the data collection process in the STDM pilot work. Pilot activities were launched in an initial workshop that was conducted in July 2014 (For more information. The three-day event took place in Mungule village, where the pilot activities are ongoing. A group of 20 community members, the majority of them women, participated.

The purpose of the workshop was to assess the outcome of the test enumeration that was conducted in late September 2014. A total of 50 households were enumerated in the test run with exciting results that led to the finalization of the data collection tools. Starting the second week of October, the team will, for 15 days, carry out the enumeration and mapping and feed the data into the STDM tool.  Local chiefs are supporting the process, which has triggered mixed reactions among the local leadership. Subsequently however, the Kotuba Women’s Association and the Peoples’ Process on Housing and Poverty in Zambia have moderated discussions with the local leadership to seek buy-in, with the majority of them having accepted the process.

The enumeration and mapping process seeks to document household land holding and conflicts in relation to social tenure arrangements among the community members. The pilot will be a stepping stone towards seeking dialogue around community challenges in relation to land holdings, disenfranchisement, secure tenure and improvement of livelihood. The activities are led by the Katuba Women’s Association and the People’s Process and Housing and Poverty in Zambia (PPHPZ), supported by the Huairou Commission and GLTN. STDM will find relevance in a rural-customary environment for the first time since it was launched in June 2014. The initial experiences and outcome will be shared in the upcoming Land Policy in Africa Conference in Addis Ababa, Ethiopia in November, 2014.