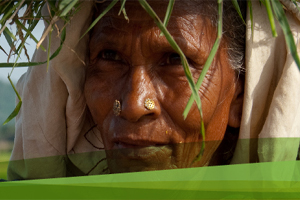 As their husbands, fathers, and brothers migrate to cities in search of work, women across India have become the backbone of the country’s agricultural sector. Today, after decades of male urban migration, nearly 80 percent of all rural women in India labor in the fields.

A study released Sunday by UN Women India and Landesa, a global NGO working to improve land rights for women and men, finds that despite their time spent working in orchards, cotton fields, and rice paddies, women rarely inherit the land that has sustained them and which they have sustained. The survey of more than 1,400 women and 360 men in agricultural districts with large numbers of women farmers in three Indian states, Andhra Pradesh, Bihar, and Madhya Pradesh, found that just one in eight women whose parents own agricultural land inherit any of it.

This is the case even though, in 2005 the government of India amended its inheritance laws to ensure daughters enjoyed equal rights to inherit their parent’s land and property. In fact, the research found that women’s inheritance is so rare that two-thirds of the women surveyed didn’t know of any female who had inherited land from her parents.

One in four women don’t know that they have a right to inherit family land and the overwhelming majority don’t know the basic details of their legal rights in this regard – for example only 18 percent of women were able to correctly identify who is entitled to inherit land from fathers.

Just as worrisome, about half of the women reported that religious leaders do not recognize daughters’ right to inherit parental land and almost the same number said that these rights are not recognized by Panchayat (local government) officials or by their communities. This has significance far beyond intra-family squabbles over divvying up the family fortune. It is fundamental to India’s rural development and progress on a host of development indicators.

Simply, if women farm the land but don’t own it, they are little more than migrant laborers tilling fields owned by others. Without legal control over the land, or any documentation that they have rights to the ground they farm, they can’t access institutional credit, such as bank loans. And they can’t take advantage of agricultural extension programs, such as government offers of subsidized seeds and fertilizers. All of this stymies agricultural development. It also limits agricultural production. This doesn’t just mean women have fewer tools for climbing out of poverty, it can also mean that their children are stuck there too: Researchers have found that women direct more of their income than men towards their children’s education and nutrition.

Women who own land tend to use the profits from it to improve the fortunes of their children, which has been found to reduce poverty and child mortality, and broadly improve children’s education and health. Recognizing the critical importance that women’s land rights play in their economic empowerment and families’ ability to climb out of poverty, India acted in 2005 to give sons and daughters equal rights to inheriting family land and property. The passage of the Hindu Succession Act Amendment at the time was heralded as an important step forward for India’s women.

Click here for the full story – courtesy of Landesa

After half a century, land titles given to residents of Ponte do Maduro: Recife, Brazil
L’acces a la terre, pour la femme rurale en DRC