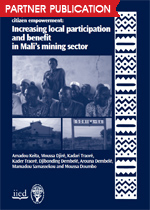 In Mali, land and natural resources are central to economies and societies. The livelihoods of most rural people are based on these resources. In recent years, outside players have also become increasingly interested in Mali’s natural resources – particularly valuable subsoil resources like minerals.

Mali’s mining sector has grown greatly since the early 1990s, with a surge in gold mining activities by domestic and foreign investors attracted by the country’s rich deposits. Mining on an industrial scale is now a major activity and the second largest source of export income after cotton.

But while the state receives revenues from mining operations, some observers have criticised the negligible benefits received by local communities and the evictions and environmental pollution caused by mining activities. Macroeconomic figures about the contribution of mining to GDP or foreign exchange do not say much about the impacts (positive and negative) that mining is having at the local level – for instance, in terms of security of local land rights, and local participation in investment decisions and benefits.