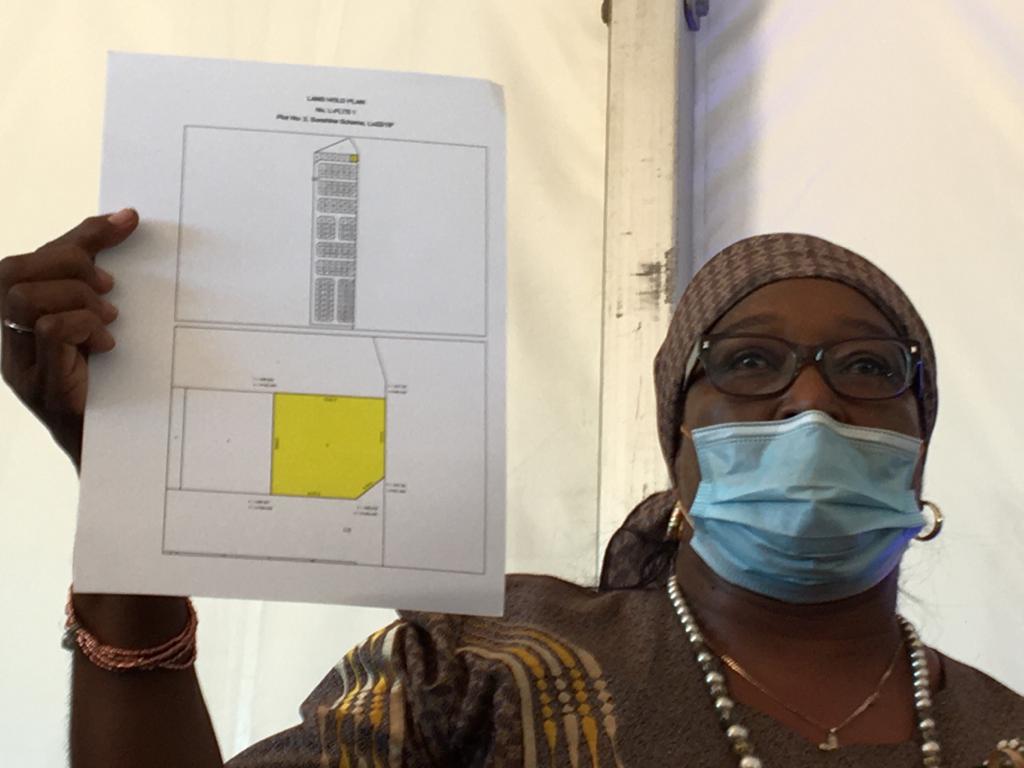 On Friday 5th March 2021, the Government of Namibia through the Ministry of Land Reform issued 988 land hold titles to nine associations in Freedom Square, an informal settlement in Gobabis municipality, with an additional 122 to be printed in due course. This is a huge milestone to the residents of Freedom Square and to the stakeholders championing the improvement of tenure security of middle and low-income groups residing in different informal settlements of Namibia. The land hold titles are a statutory form of tenure which include similar rights of freehold ownership, hence improving tenure security to communities that were previously insecure and undocumented and in so doing, improving their quality of life. Freedom Square residents now have the liberty to incrementally improve/develop their dwellings, i.e. housing and other basic facilities including water and proper sanitation.

Land registration is considered a very important step towards ensuring that the right to land is recognized and protected against contesting claims on a parcel, hence ‘tenure security’. Tenure security is achieved when there exists the certainty that a person’s rights to land is and will be recognized by others (the government, the community, neighbours) and protected in cases of specific challenges. With land being a finite resource, the process of land registration can be quite difficult especially for the poor, women and vulnerable groups who lack the means, financially, as well as the information on how to access formal systems to land registration. Alternative approaches that are more adaptable to local needs and circumstances and which are grounded in legitimate and acceptable societal and institutional practices and customs are therefore required. Over the years, UN-Habitat and the Global Land Tool Network (GLTN) in collaboration with various partners including governments (at different levels), land professions, civil society organizations as well as the affected communities themselves have been developing and advocating for the adoption at scale of innovative, fit-for-purpose land tools and practices to document land not serviced by formal land administration systems. Such is the case in Namibia, where UN-Habitat and GLTN have supported the national government, through the Ministry of Agriculture, Water and Land Reform (formerly the Ministry of Land Reform), in the implementation of the Flexible Land Tenure System (FLTS), an innovative approach to provide affordable security of tenure to inhabitants in informal settlements.

The Flexible Land Tenure System aims at establishing an interchangeable tenure registration system complementary to the current formal system of freehold tenure to cater for middle and lower income groups and is derived from the need to create upgradeable alternative land tenure options in informal settlements while also complementing the freehold tenure. UN-Habitat and GLTN support included technical assistance in the drafting of the Flexible Land Tenure Act (FLTA) regulations. The Flexible Land Tenure Act 2012 (ACT No.4 of 2012) provides an opportunity to incrementally improve tenure security of low income groups and its objectives include: (i) to create alternative forms of land titles that are simpler and cheaper to administer than existing forms of land title; (ii) to provide security of title for persons who live in informal settlements or who are provided with low income housing; and (iii), to empower the persons concerned economically by means of these rights (Government of the Republic of Namibia 2012). In March 2015, the draft regulations were accepted by the Ministry of Land Reform with recommendations to “first pilot the regulations before gazettement”.

In 2015, the Social Tenure Domain Model (STDM) was introduced by GLTN to the Namibia Housing Action Group (NHAG), a non-governmental organisation (NGO) formed in 1992 to assist low-income housing groups improve their living conditions and gain access to basic infrastructure, including sanitation and housing. The organization has been working since 1998 in support of Shack Dwellers Federation of Namibia (SDFN), a network of savings groups comprising local communities that reside in informal settlements in different parts of Namibia. Freedom Square, an informal settlement in Gobabis municipality was selected for the pilot project; the community in Freedom Square had resided in this settlement for more than fifteen (15) years without security of tenure. The project was thus aimed at registering their land rights using the STDM as a trial to upscaling the FTLS. Prior to STDM implementation, the Freedom Square community had been negotiating with the local government in Gobabis against relocation from this land. The project ran between June 2015 and December 2016 in which NHAG, UN-Habitat, Ministry of Land Reform and other key stakeholders collaborated to deliver on: capacity building on the STDM tool and process; planning, surveying and re-blocking; learning, knowledge management and documentation. The implementation undoubtedly formed the foundation for ongoing, constructive collaboration with the Ministry of Land Reform, the Gobabis municipality, and in engaging the community to organize themselves and enhance their capacity to participate in issues affecting them within their settlements. As a direct outcome of the re-blocking processes and priority needs identified after analysis of data collected by community members themselves, water services were installed in 2017 by the community, with financial support from the Ministry of Urban and Rural Development. By the end of the project, the finalized layout catered for 1,110 residential plots which contained relevant information to facilitate establishment of each plot boundary and streets on the ground. Out of these, 1,110 occupants were cleared to receive their Land Hold Titles. A comprehensive account of the project can be accessed in the project video.

The FLTA regulations were finally issued in 2018 and paved the way for the implementation of the law which included the establishment of the Land Rights Office (LRO) and use of a computer system for recording information on starter and land hold title registers, also known as the Computer-Based Flexible Land Tenure System (CB-FLTS). It is also at the same time that GLTN partnered with the Gesellschaft für Internationale Zusammenarbeit (GIZ), through the Support to Land Reform (SLR) Programme, to pilot the development and operationalization of the CB-FLTS, using the STDM framework, with a focus on the initial registration of land hold title rights for selected schemes in the country. Key milestones achieved during the pilot project, which ended in 2020, included the development and deployment of version 1.0 of the CB-FLTS at the LRO; an assessment of the capacity of the MAWLR in operationalizing the system; and, training of the relevant Ministry staff in the administration and use of the system. So far, the system has been used to register the land hold title rights of holders in 13 schemes.

Experiences from Freedom Square clearly laid the groundwork for the upgrading of the settlement, with the recent issuance of land hold titles being a culmination of the hard work and commitment of the residents therein, and various stakeholders including the Government, NHAG, GLTN and UN-Habitat to the cause. In 2020, community in Freedom Square completed work on water and sewer reticulation, and 27 houses were constructed with some residents already making extensions to further improve their housing. Lessons from this undertaking are contributing as a model for roll-out of the Flexible Land Tenure System throughout Namibia.

Building on this initiative, the Ministry of Agriculture, Water and Lands Reform, UN-Habitat and GLTN with support from GIZ, are working to expand the functionality of the CB-FLTS to support the full implementation of the business processes as envisaged in the FLTA. The rollout of the system is expected to contribute and promote the delivery of tenure security for households in informal settlements in Namibia and improve the provision of FLTS-related land administration services by the Ministry and the local authorities.