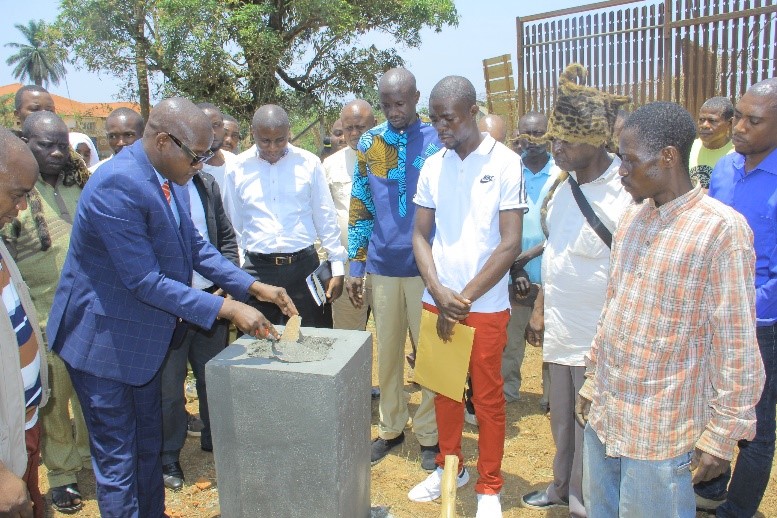 The 9th of March 2021 will go down in history for the residents of Mambasa Territory in Ituri Province as the day that the Provincial Governor, represented by the Provincial Minister of Land Affairs, laid the foundation stone for the Mambasa Land Administration building. The ceremony was attended by the local territory administration, the Land Administration, the civil society, the village chiefs, elected Members of Parliament from Mambasa as well as members of the local community. This was all made possible with the support from UN-Habitat represented by Université Chretienne Bilingue du Congo (UCBC), the local implementing partner.

This construction project is part of the land reform process in which the government has been engaged in since 2012 and which UN-Habitat has been supporting in the framework of the ‘Land Reform Support Program: Development of the land policy document and capacity building of the land administration’ that was launched in August 2017 with funding from the DRC National REDD + Fund (FONAREDD). The project is a collaboration between the Government of the Democratic Republic of Congo through the Ministry of Land Affairs and the National Commission for Land Reform (CONAREF)which was mandated to conduct the land reform process.

The land reform support program seeks to: Provide institutional support to CONAREF; Develop a national land policy in a participatory manner and revise land laws and regulations; Improve security of land tenure in target communities and develop methodological guides in this area; and, Establish the land information system and strengthen land administration in the target provinces.

Within the framework of the land reform support program, objectives 3 and 4 have to do with improvement of land tenure, establishment of a land information system and strengthening of the land administration in the target provinces. UCBC facilitates the establishment of the Community Land Register to fill the gaps in Congolese law relating to the legitimate land rights of local communities through the establishment Local Land Committees (CFLs).

The launching the construction, estimated to last up to 5 months, coincided with the official handover of various equipment such as computers, GPS sets, a solar power system and furniture to the Mambasa Land Administration to strengthen the capacity of this land district to effectively respond to the challenges of land information management. The Community Land Service, which will facilitate the organization of the community land management at the chiefdom level, was also furnished with computer equipment, a solar power system and office furniture. The Provincial Minister of Land Affairs concluded the activity with all stakeholders by validating the local land charter prepared by the local land committee.