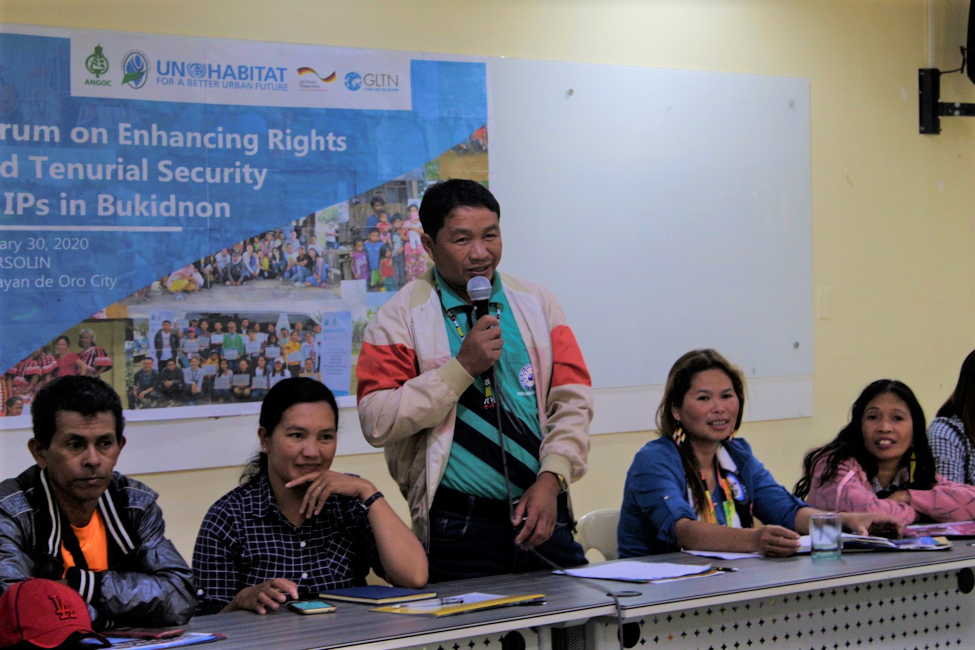 With only 21 months since the launch of the Secure Access to Land and Resources (SALaR) project in the Philippines, significant progress has been made in improving land and natural resources tenure security specifically in the rural area of Bukidnon province in Northern Mindanao.

The first phase of the project in the Philippines that began in April 2018 has come to an end. The project seeks to increase the uptake of land tools, approaches, frameworks and policy guidelines that are pro-poor, fit-for-purpose, and gender responsive. Secondly, it aims to strengthen the capacity of change agents and rural poor women, men and vulnerable groups to implement pro-poor, fit-for-purpose and gender responsive land tools and approaches. The project also is also working to improve awareness among stakeholders on issues and measures for improving land and natural resource tenure security for poor women, men and vulnerable groups.

The “Forum on Enhancing Rights and Tenure Security of Indigenous Peoples in Bukidnon” of January 2020 brought together the project stakeholders to reflect on the project’s progress. Organised by the implementing partners Asian NGO Coalition for Agrarian Reform and Rural Development (ANGOC) and Xavier Science Foundation (XSF) with whom the project intended beneficiaries have been working with, the forum also afforded GLTN an opportunity to carry out capacity building on innovative land tools and approaches to support project stakeholders in developing, adapting and strengthening their land governance systems.
The meeting attracted more than thirty participants such as representatives from the Local Government Units (LGUs) and a mix of community members including tribal leaders, youth and women from the three target Indigenous Peoples Organizations (IPOs): Miarayon Lapok Lirongan Talaandig Tribal Association, Inc. (MILALITTRA), Nagkahiusang Manobong Manununod sa Yutang Kabilin (NAMAMAYUK) and (Portulin Talaandig Tribal Association, Inc.) PTTA.
The meeting discussed project findings, challenges encountered during project implementation and proposed solutions.

“We are very thankful of this project. It is truly a great help especially in controlling the outsiders from encroaching our lands since it now has clear delineation,” said Ms. Emely Samson, a woman representative from the PTTA Indigenous People Organization.

Hon. Regelito Deconlay, a Barangay chairman (village chief) from Barangay Lirongan, who is also a very active member of MILALITTRA, observed that the project has been very instrumental in mediating conflicts particularly those arising from land boundaries. He added that the provision of the Certificate of Customary Land Occupancy (CoCLO) is beneficial because the community has something tangible to hold on to as evidence of their occupation on the land.
This first phase of the project successfully issued 215 CoCLOs to households in NAMAMAYUK. These documents capturing names of household members are signed by the heads of households such as a man and wife in the case of married couples recognizing the land and resources as conjugal property, and either a man or woman for single-headed households. The youth are also recipients of these documents as envisioned by the project. The issuance of more CoCLOs in MILALITRA and PTTA will be done in 2020.
Isabelo Tandejon, a Tribal Chieftain of NAMAMAYUK emphasized the need of cooperating with the LGUs and other national agencies to strengthen efforts towards the achievement of the project goal.
The SALaR project is being implemented in the Philippines, Laos and Uganda with a focus of improving tenure security for poor rural smallholder farmers in the context of customary land in Uganda, Indigenous Peoples rights in Philippines and communal lands in Laos.
The project is funded by the Federal Ministry of Economic Cooperation and Development of Germany (BMZ) under the Ministry’s special initiative ‘One World-No Hunger’ which takes into consideration the centrality of land in achieving this objective.
TagsLand Tenure Security Philippines SALaR project

New partnerships and perspectives for the Arab Land Initiative: the outcomes of an induction, capacity development and planning workshop
GLTN to showcase work on land through various events at the 10th Session of the World Urban Forum