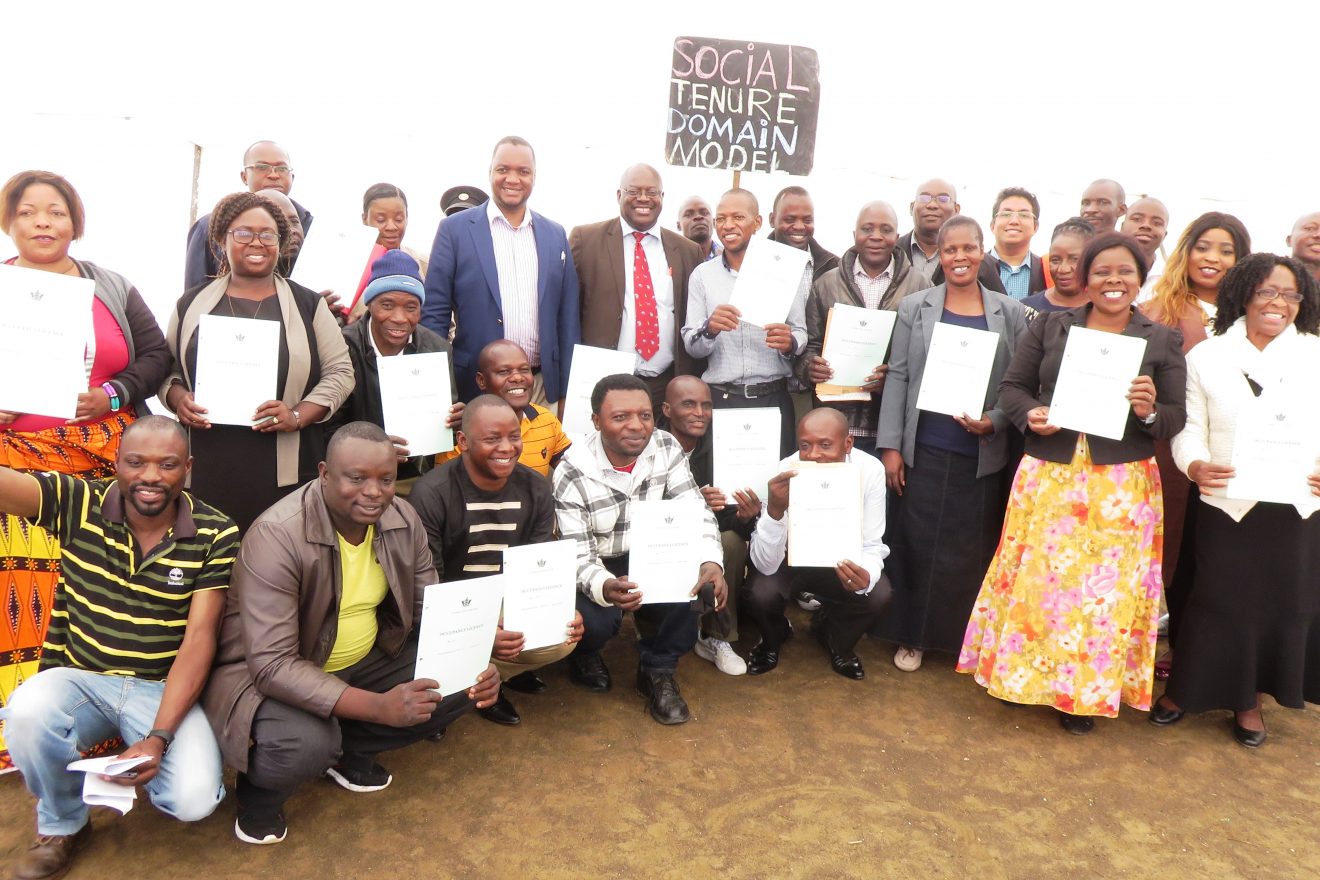 It was all smiles and excitement on the faces of many residents as they received occupancy licences during the presentation ceremony in the informal settlement of Kanyama. One of the beneficiaries, Florence Kawesha, who was constantly smiling and finally at ease, was grateful to have benefited from this project and for having the occupancy licence in her hands. She said while firmly holding the precious paper, “I now have peace of mind knowing that no one can evict me from my property”.

Florence is one of many of residents of Kanyama which is in Lusaka and is the largest informal settlement in Zambia. The certificate presentation ceremony was thus described as a land mark event in Kanyama and in the history of the city of Lusaka by its mayor, Honourable Miles Bwalya Sampa who presided over the ceremony. The Mayor went on to say that the issuing of the occupancy licences was part of the Zambian government’s efforts to provide security of tenure for the urban poor which in turn produces sustainable and long-term development in the country. This security of tenure explains why another resident Dopson Dobola kept talking animatedly stressing the importance of the occupancy licence by saying “…now this land or this house that I will be staying in, is now mine! It is mine and no one will come and interfere with me in any way!” Dopson’s sentiments were visible and echoed by the residents who attended the ceremony.

This is because more than 18,000 of households in Kanyama have had their data collected, capturing more than 12,000 properties in the process of Kanyama.

Even though the occupancy licences are not land titles they guarantee occupancy rights to a dwelling or house on a piece of land for a 30-year period, which is renewable. This explains the peace and elation that Dopson, Florence and all the other residents of Kanyama have because of receiving the occupancy certificates.

This process leading to the issuing of the occupancy licences is part of Lusaka City Council’s efforts to improve tenure security and service provision under its Citywide Slum Upgrading and Prevention Strategy. The strategy combines different elements of slum upgrading such as enhancing tenure security, housing improvement and provision of basic infrastructure. The project is supported by UN-Habitat and Global Land Tool Network (GLTN) using pro-poor, gender responsive and fit-for-purpose land tools and approaches, like the Social Tenure Domain Model (STDM) which improve tenure security. Other collaborators include the Ministry of Lands and Natural Resources, Ministry for Local Government and Housing, Peoples’ Process for Housing and Poverty in Zambia and the project implementers- Lusaka City Council, Kanyama ward leadership and grassroot community members through the Kanyama Ward Development Committee.

In his speech, the Mayor emphasized the challenges of tenure insecurity for residents of peri-urban areas which were caused by the pressures of unplanned urban growth resulting in uncoordinated development without improvements in provision of basic services. He spoke about the need for mechanisms to monitor development and prevent land disputes which came under the dockets of the other dignitaries who attended the ceremony and included the Chairperson for the Community Development and Social Services Committee, the area Councillor for Kanyama Settlement, Director Housing and Social Services, Chairpersons of Council Committees, Heads of Departments at the Lusaka City Council, representatives from the Ministry of Lands and Natural Resources, representatives from UN-Habitat regional and country offices, GLTN Secretariat, and residents of Kanyama. Overall the Mayor lauded the issuing of licences by the Council, urging residents of Kanyama who attended the ceremony in large numbers to take the opportunity and disseminate the information and secure their properties.

This project is part of GLTN’s support to the Government of Zambia in the development and implementation of the national land reforms in a threefold initiative: