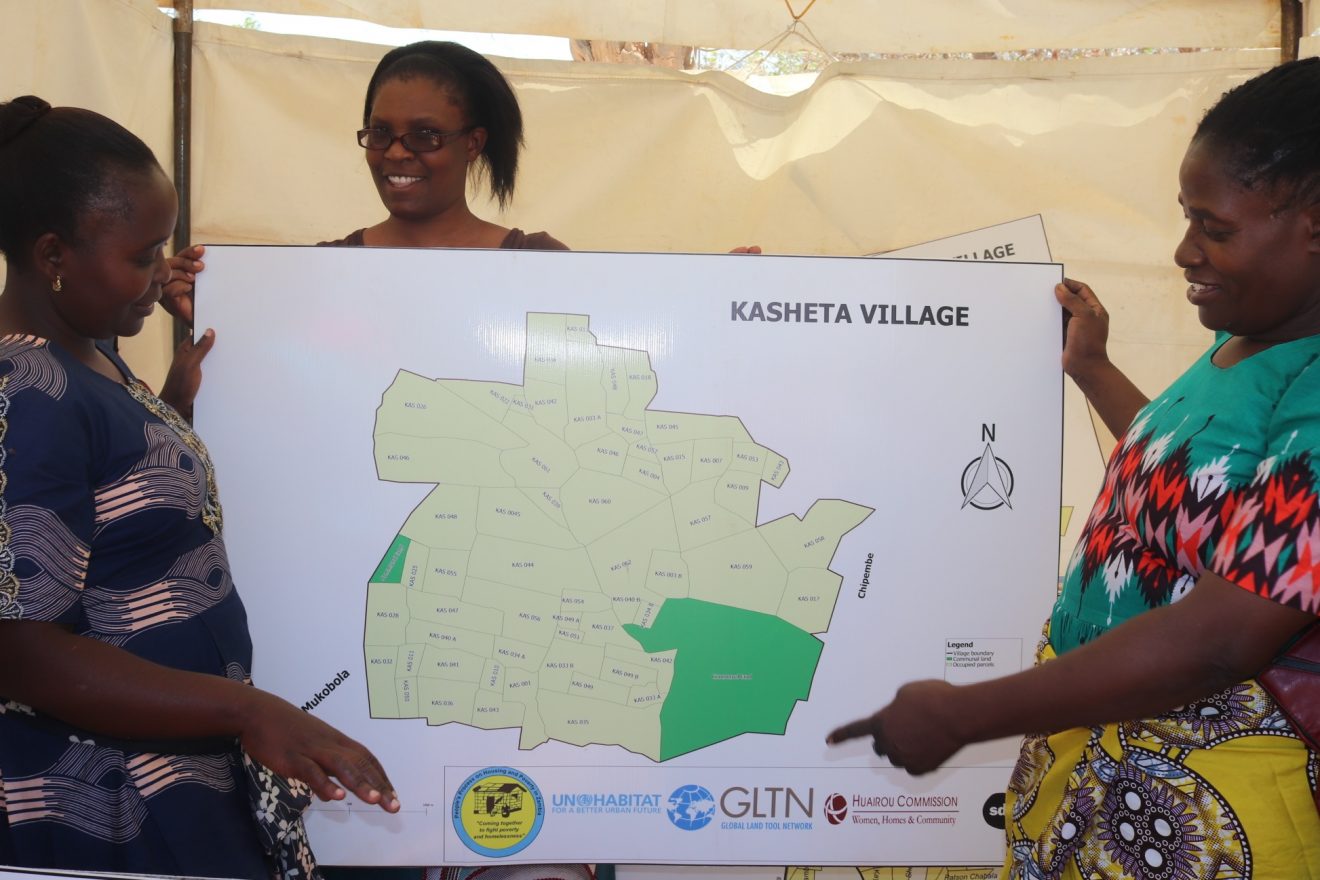 On the 21st of September 2018, community members from 10 villages namely Chisaka, Kaputula, Shipunga, Musumali, Mponge, Mwanampaya, Ndililwa, Mukobola, Kasheta and Chipembe, within Chamuka Chiefdom, Chisamba District, Zambia were issued with 490 certificates of customary occupancy towards the improvement of tenure security on customary land. This event comes not so long after the issuance of forty (40) certificates to residents of Bulemu village in October 2016 in the same Chiefdom in an exercise aimed at supporting the documentation of customary land through the implementation of the Social Tenure Domain Model (STDM), a pro-poor, gender responsive, participatory and affordable land information system developed by the Global Land Tool Network (GLTN), facilitated by UN-Habitat.

In an atmosphere charged with joy and excitement, one by one, community members came forth to collect their certificates, some dancing, some ululating at the mention of their names, some simply running and holding this important document up high for all to see. The whole community was in high spirits and they regarded this day as one that changed their lives forever. Teresia Nkandu Temangandwe from Musumali Village, a widow with eight (8) children said she could now rest knowing that she would no longer have land wrangles with her neighbours over boundaries as was the norm in the past. ‘‘…I can now farm in peace, use the land to produce and sustain my livelihood and that of my children’’. Another community member from Mukobola Village, Anna Lunsungwe, 72 years of age, a widow left in the charge of her grandchildren shared that she is secure, protected and happy because the issue of displacement was now in the past. She thanked His Royal Highness Chief Chamuka VI, for showing great love for his people by securing community land which is their biggest asset.

Most of Zambia’s rural landmass (94%) is managed by traditional authorities through an informal and undocumented land administration system, while the statutory system is largely absent in rural areas. Customary land tenure is the least secure type of tenure because it is largely undocumented making inhabitants of such land susceptible to forced displacement and frequent land disputes among villagers, head persons and even chiefs pertaining to boundaries. The implementation of GLTN land tools has among other benefits empowered the community to negotiate with investors regarding the development of their land. For instance, in Bulemu Village, the community has negotiated a 25-year lease period for their land with an Israeli firm for a solar project. This agreement will see these households benefit from the solar energy at no cost for the next 25 years and each household will further benefit from sharing in the earnings of the solar project. In the same Chiefdom, another community also through the guidance of Chief Chamuka and the government, has negotiated with investors for the compensation of their land in return for the set up of a manganese factory. To give way for the factory, the community was relocated to a new area at no cost where services and land to till was available.

This auspicious occasion, hosted by His Royal Highness Chief Chamuka VI, was attended by a large number of community members from Chamuka  and was also graced by dignitaries from the land sector in Zambia who included: the Deputy Permanent Secretary Central Province representing the Hon. Minister Jean Kapata in the Ministry of Lands and Natural Resources, Director Chief and Traditional Affairs, Representatives from the Surveyor General’s office, their Royal Highness’ Chieftainess Mungule and Chief Liteta, Chiefs and Traditional Affairs representatives from the Central Province, District Commissioner Chisamba District, Council Secretary Chisamba District, Senior Headpersons and Headpersons of Chamuka Chiefdom, Senior staff from the Lusaka City Council, and the UN Habitat/GLTN technical officers.

The issuance of these certificates is a huge milestone for the community and the project which saw the successful mapping of a total of 578 land parcels across 11 villages and the profiling and enumeration of about 601 households with approximately a population of 3,584 people.  In terms of gender, 2042 women received the certificates which is about 57% of the total number of people who received certificates while 209 female-headed households received certificates. This adds to His Royal Highness Chief Chamuka’s continuous efforts to champion women land rights.

The project owes its success to a vibrant and effective partnership between the Chamuka community, GLTN/UN-Habitat and the Partners in Zambia who include the Government of Zambia, People’s Process on Housing and Poverty in Zambia (PPHPZ) and its grassroots alliance partner; Zambia Homeless and Poor People’s Federation (ZHPPF) and affiliated to Shack Dwellers International. In addition, the leadership and guidance of His Royal Highness Chief Chamuka VI has been pivotal to the success of this project from the beginning.

In his remarks, His Royal Highness Chief Chamuka VI underlined land as both ‘a maker and a marker’ of development and went on to elaborate how land is an important resource, supporting life and survival as well as directing development. ‘Without land, we cannot do anything, everything takes place on land’ stated the Chief who lauded the STDM implementation process for having provided a means by which the relationship of people and their land could be documented, in a peaceful manner. He informed the gathering that a total of 231 interfamily boundary disputes identified during the project had been amicably resolved through community mediation channels.  His Royal Highness added that 103 intra-family land succession disputes had been resolved out of 104 identified cases and that all the eight (8) village boundary disputes identified had been resolved peacefully by the headmen of these villages.

The UN-Habitat Director, Zambia, Mr. Alex Chileshe congratulated Chief Chamuka on this monumental success in the documentation of customary land in the Chiefdom emphasising His Royal Highness’ great leadership in Chamuka, while also recognizing the role Chief Chamuka plays as torchbearer for the documentation of customary lands in Zambia. In his closing remarks, Mr. Chileshe called upon the continued dialogue between the House of Chiefs and the Ministry of Land and Natural Resources to hasten the adoption of the draft national land policy.

Speaking on behalf of the Minister of Lands and Natural Resources, Mr. Mwape Kasanda, the Deputy Permanent Secretary Central Province highlighted that customary land had in the recent past come under increasing pressure due to urbanization and other factors which had unfortunately led to displacement of many families including women and children from their ancestral land. He noted that this displacement was compounded by the inadequacy or absence of land records hence the need for a sustainable land information management system that is participatory, pro-poor, gender sensitive, affordable and scalable to complement government efforts on land recordation, such as STDM. He stated that the enactment of the Urban Planning and Regional ACT No. 3 of 2015, called for the development and planning of both customary and state land areas and termed this as an opportune time, especially with the already existing data on Chamuka villages gathered during implementation of STDM. He urged the District council to work closely with traditional leaders and the community to develop a spatial development framework and local area plans for the development of Chamuka. He congratulated His Royal Highness Chief Chamuka VI for his efforts in providing a semblance of tenure security documents thereby improving land governance and administration in his Chiefdom and reducing land disputes and displacement of his subjects.

This initiative sets a good precedent for recognition of communities claim to their ancestral land and secures their future and that of their children and generations to come. Additionally, the initative shows how empowering women and girls leads to positive outcomes not only the women themselves but for the whole community. The project has trained over 70 para-surveyors during its implementation to ensure sustainability of the process in other villages of Chamuka and beyond. Lessons and experiences from this project are also feeding into the ongoing drafting of the national land policy by informing approaches that can be used for customary land administration and to improve coverage of land records. This is in line with the essential function of GLTN which is the development and dissemination of inclusive land tenure approaches that are practical and innovative implementation of tools, that “leave no one behind” in rural and urban areas. 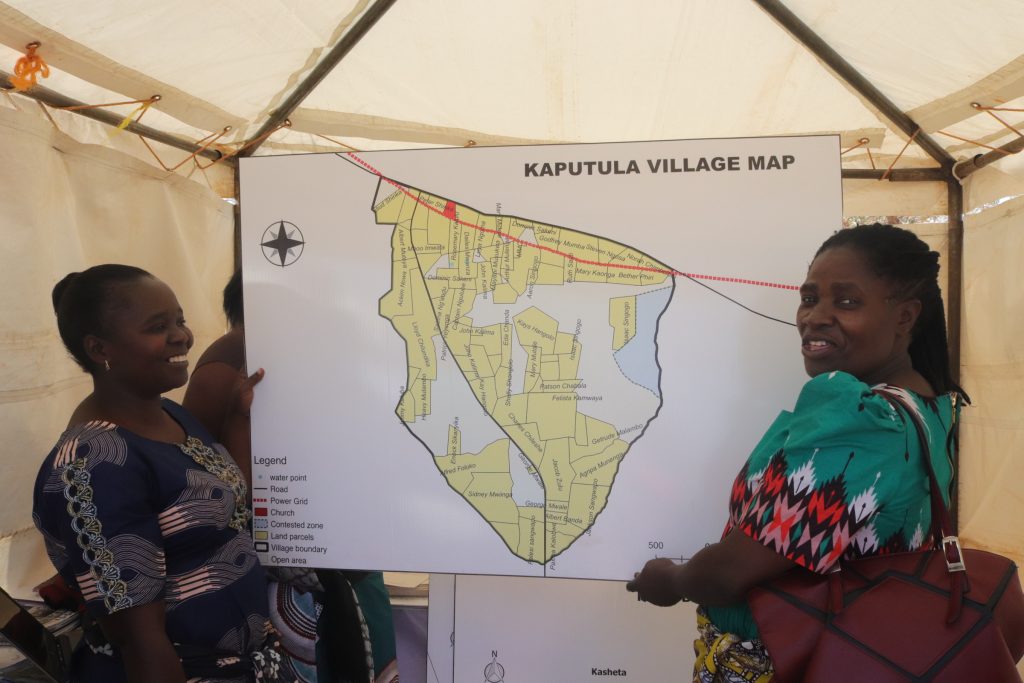 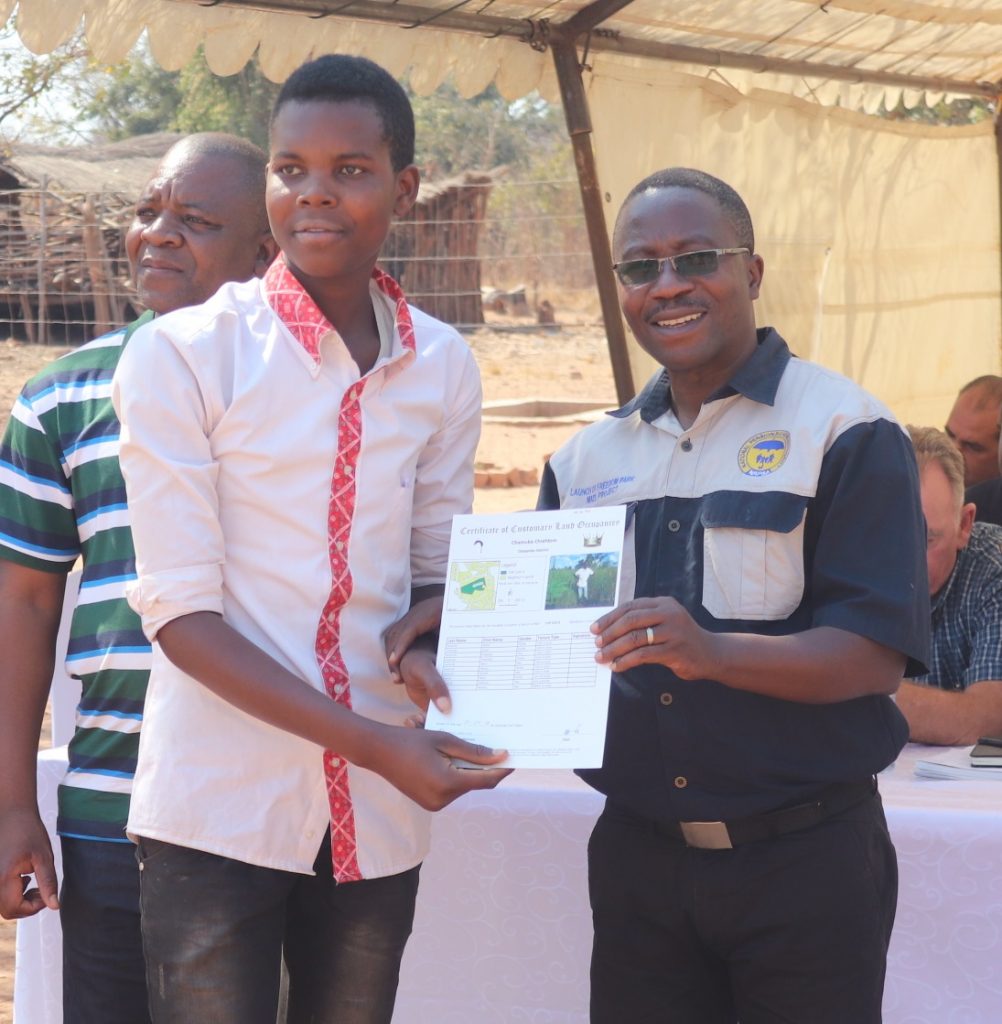 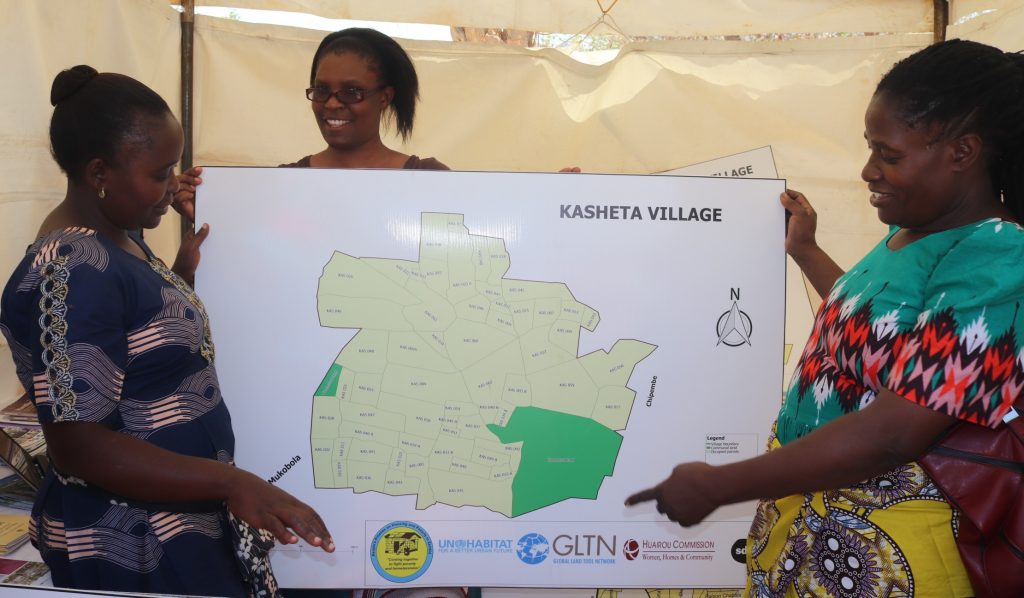 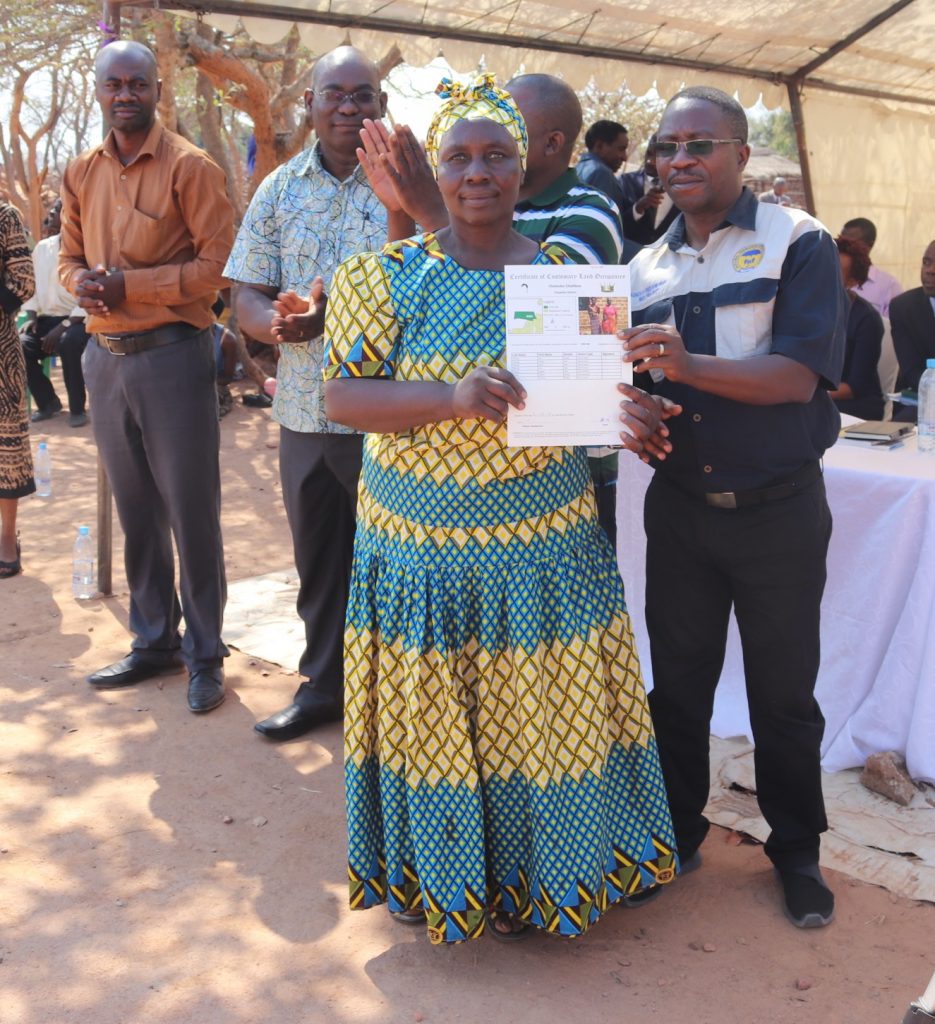 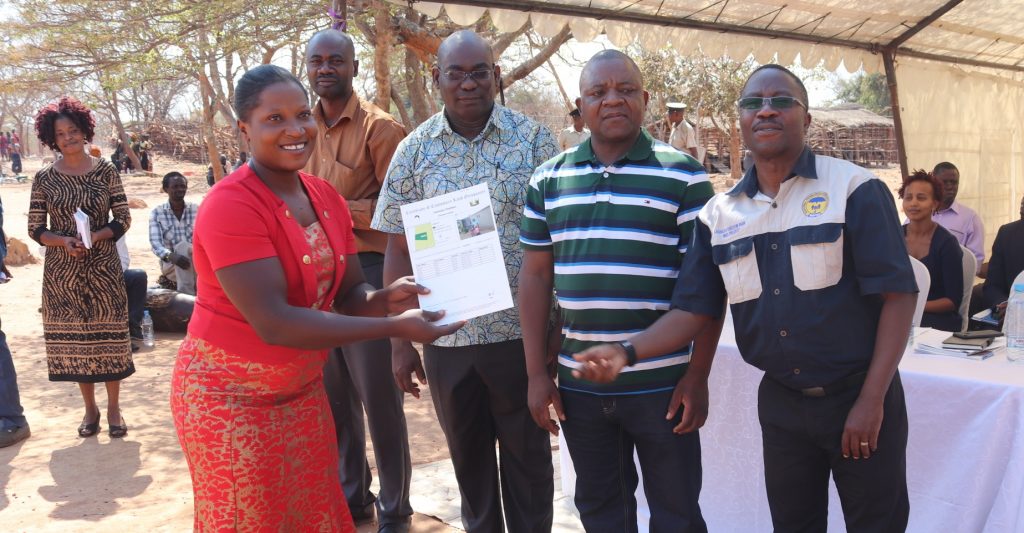 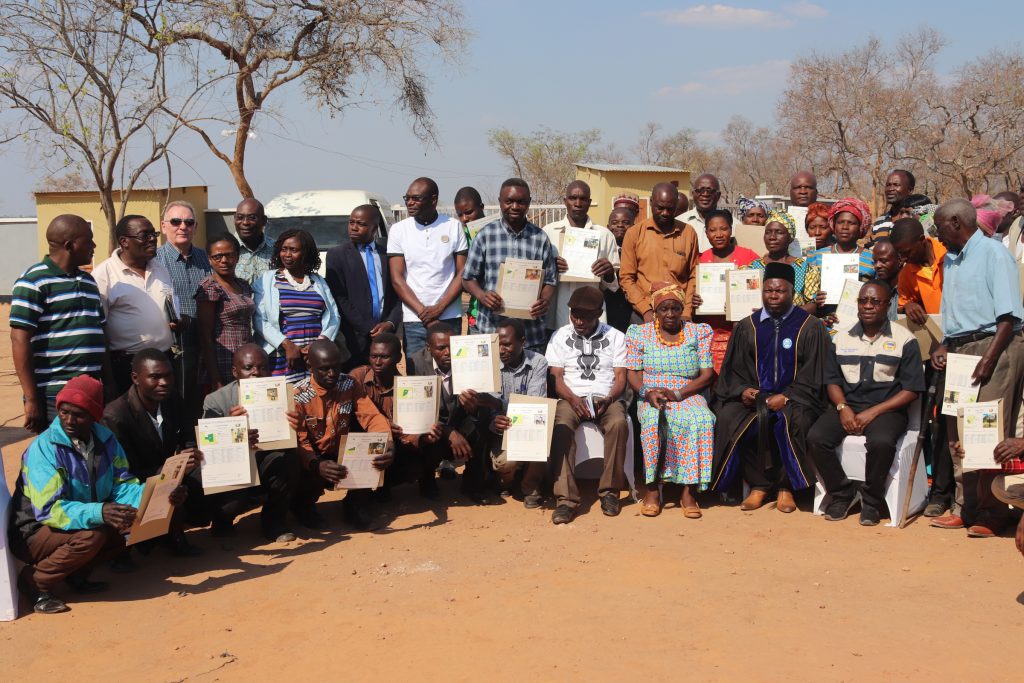 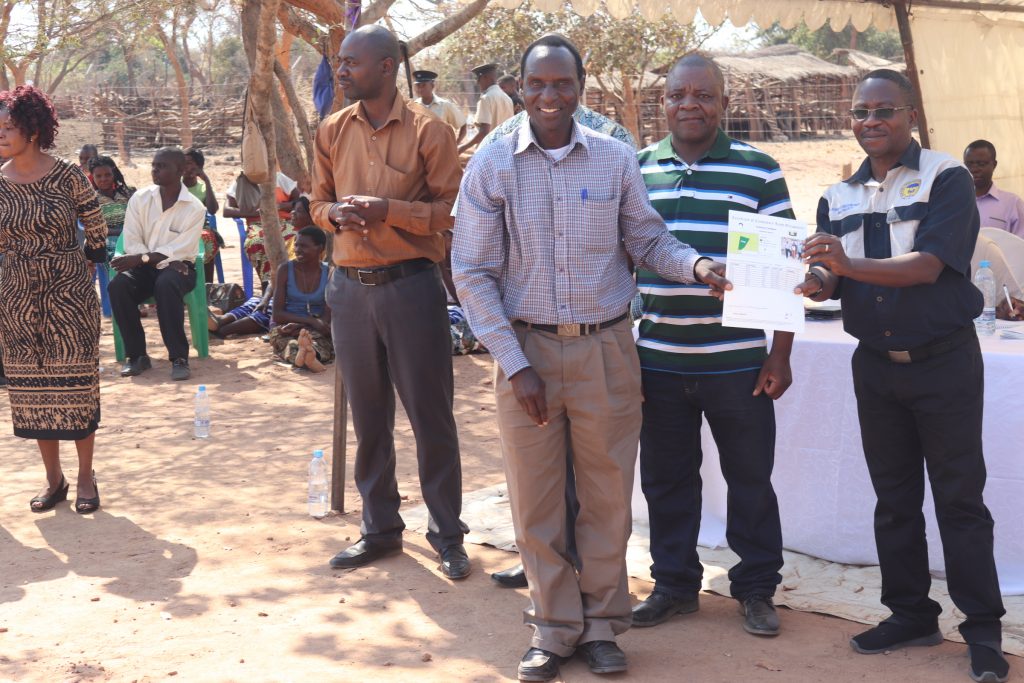 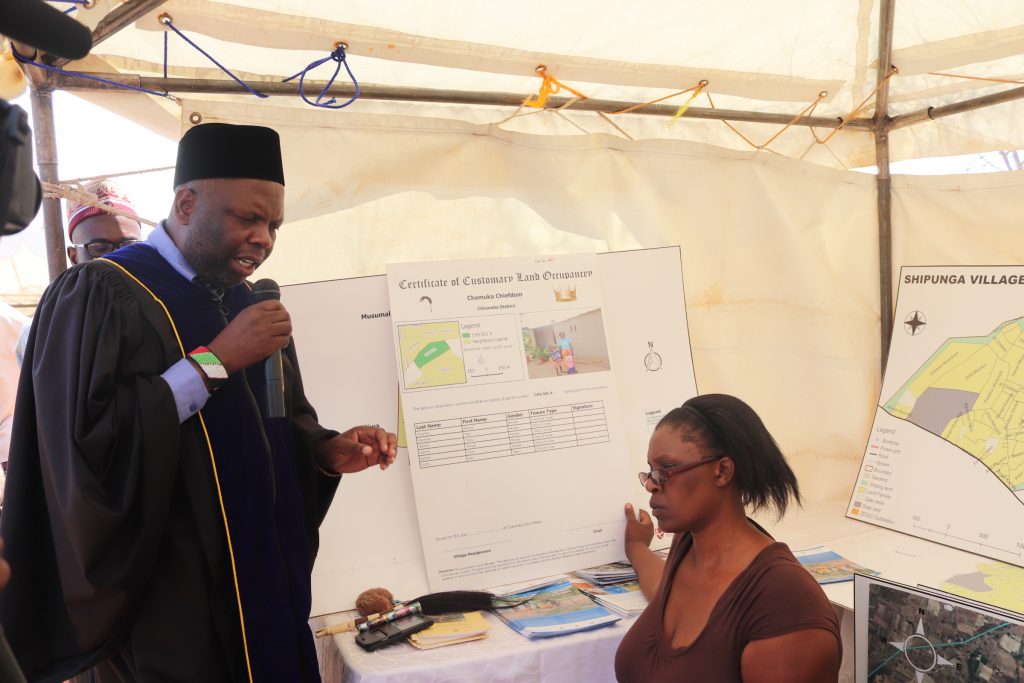 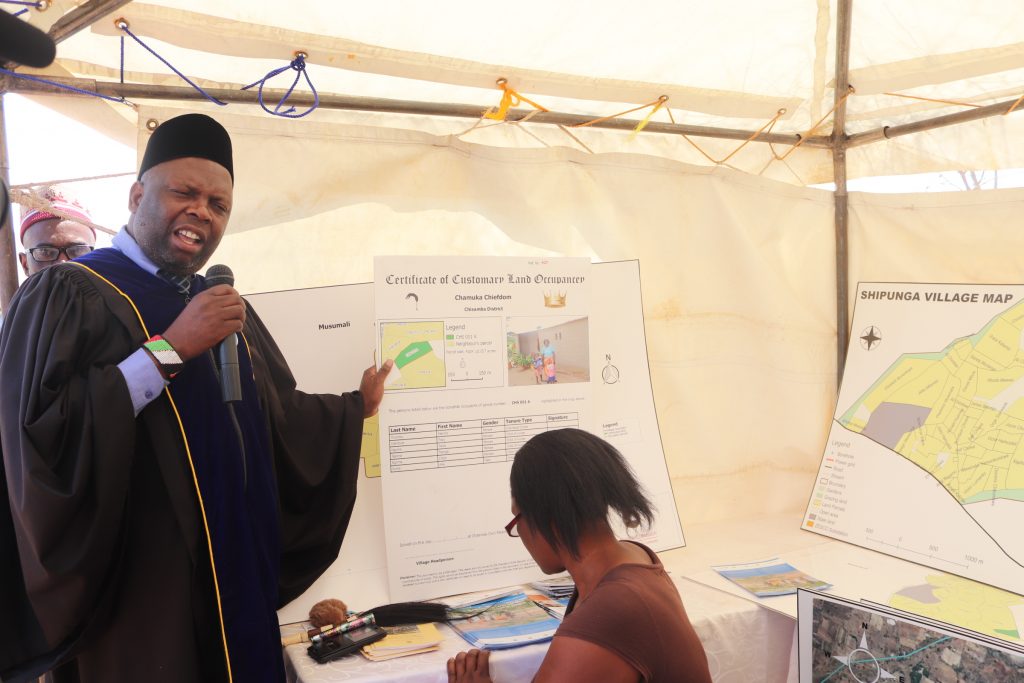