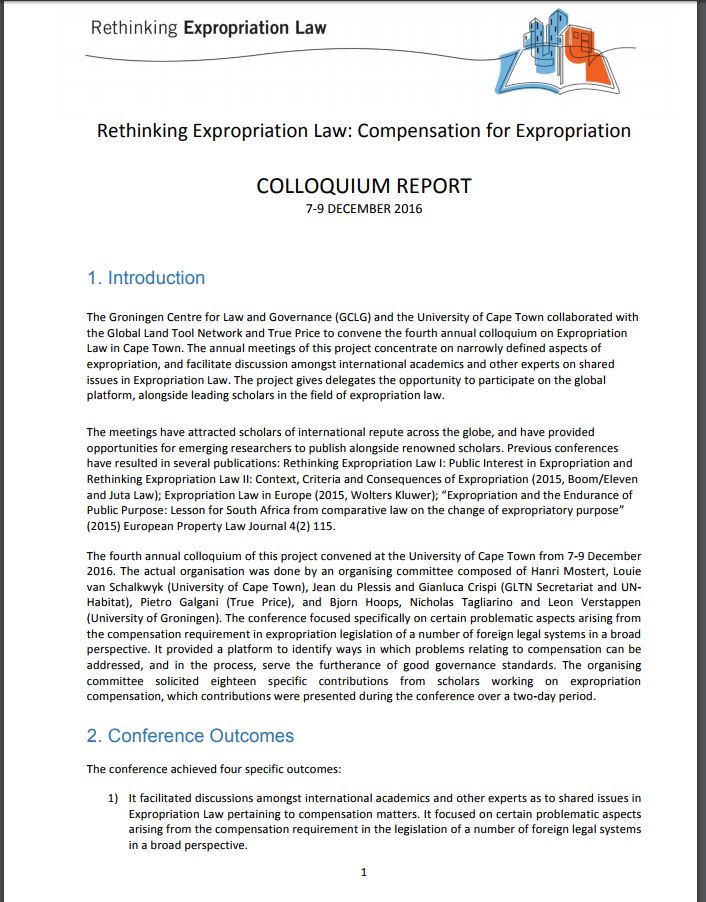 The Groningen Centre for Law and Governance (GCLG) and the University of Cape Town collaborated with the Global Land Tool Network and True Price to convene the fourth annual colloquium on Expropriation Law in Cape Town. The annual meetings of this project concentrate on narrowly defined aspects of expropriation, and facilitate discussion amongst international academics and other experts on shared issues in Expropriation Law. The project gives delegates the opportunity to participate on the global platform, alongside leading scholars in the field of expropriation law.

The fourth annual colloquium of this project convened at the University of Cape Town from 7-9 December 2016. The actual organisation was done by an organising committee composed of Hanri Mostert, Louie van Schalkwyk (University of Cape Town), Jean du Plessis and Gianluca Crispi (GLTN Secretariat and UN- Habitat), Pietro Galgani (True Price), and Bjorn Hoops, Nicholas Tagliarino and Leon Verstappen (University of Groningen). The conference focused specifically on certain problematic aspects arising from the compensation requirement in expropriation legislation of a number of foreign legal systems in a broad perspective. It provided a platform to identify ways in which problems relating to compensation can be addressed, and in the process, serve the furtherance of good governance standards. The organising committee solicited eighteen specific contributions from scholars working on expropriation compensation, which contributions were presented during the conference over a two-day period.