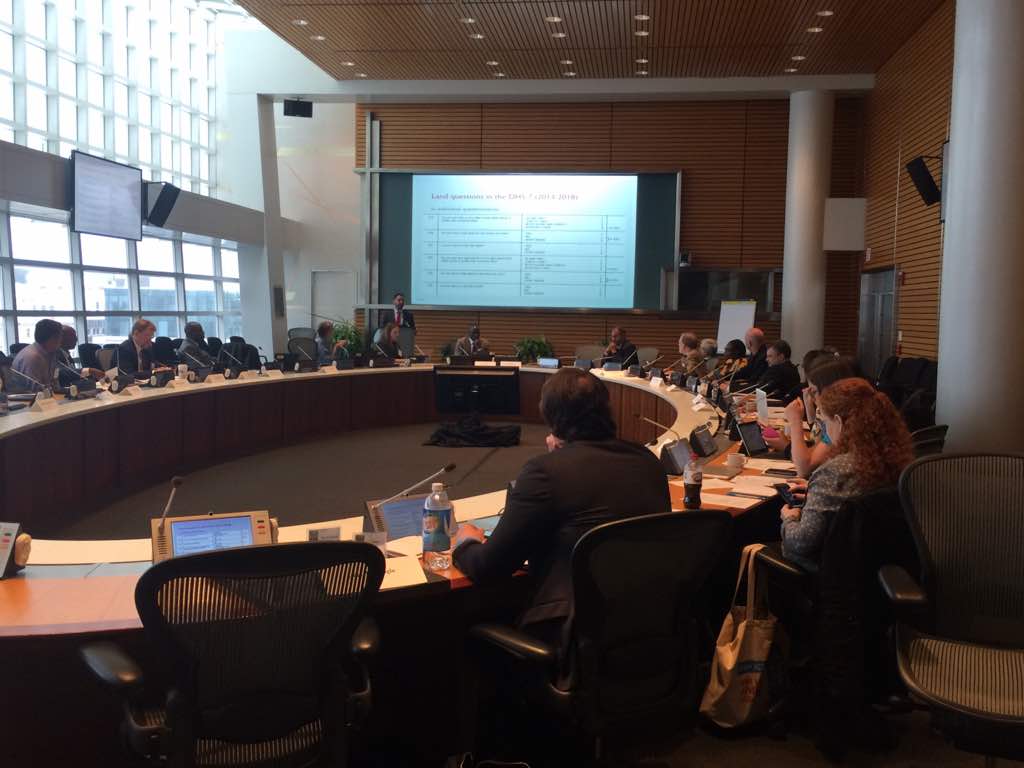 The discussions will focus more on  three key areas for measuring  indicator 1.4.2 – a measure of what entails ‘secure tenure’, ‘documented tenure rights’ and ‘perception of tenure security’ with key outcomes expected to formulate short list of questions to be discussed. Global experts taking part in this important meeting are expected not only to reflect on achievements made in monitoring land issues in the existing surveys but also review new initiatives such as the GLII pilot of land tenure security module in 3 countries in Africa and Property Rights Index (PR Index) global poll for measuring perception data with pilots having been conducted in 9 countries globally.

A specific indicator is provided for under SDG 1, Target 1.4 (Indicator 1.4.2), to measure land tenure security through ownership and control over land.

Target 1.4 states that by 2030, ensure that all men and women, in particular the poor and the vulnerable, have equal rights to economic resources, as well as access to basic services, ownership and control over land and other forms of property, inheritance, natural resources, appropriate new technology and financial services, including micro-finance.

Indicator 1.4.2 aims to measure the ‘proportion of total adult population with secure tenure rights to land, with legally recognized documentation and who perceive their rights to land as secure, by sex and by type of tenure’

This EGM will be part of a series of expert consultation meetings organized by UN-Habitat and World Bank in order to develop an internationally established methodology for comparable land data at country level to monitor tenure security for all, including legally documented and perceived tenure rights. The role of survey agencies in mainstreaming land questions in their surveys will also be addressed in this meeting.

Reflecting on the MDGs, UN-Habitat through the Global Urban Observatory Unit (GUO) and partners made considerable progress in developing a methodology consistent across countries and regions to measure security of tenure in urban context. Observations using this method were implemented in 25 cities around the world through Urban Inequities Surveys. People or households were considered to have secure tenure when there was evidence of documentation that can be used as proof of secure tenure status; or when there is either de facto or perceived protection against forced evictions.

As a custodian agency for 1.4.2 in collaboration with the World Bank, UN Habitat through the Global Urban Observatory Unit provides inputs for countries to build on existing knowledge carried forward from the MDGs and experiences from key agencies working in this area to respond to the demands of indicator 1.4.2. The Land and GLTN Unit consider this EGM timely and critical in advancing tenure security for all, fighting poverty and inequality and in line with the principles of the New Urban Agenda.

Land as a component for ending poverty and inequality

The global 2030 Agenda for Sustainable Development recognizes land as an asset and factor of production through which poverty and inequality can be tackled in rural and urban areas. Agriculture is estimated to generate 10 per cent of GDP in low and middle income countries. Land is a source of food and shelter; the basis for social, cultural and religious practices; and a central factor in economic growth. Due to this, land tenure security is considered highly relevant to the achievement of SDGs; for ending poverty, ending hunger, achieving food security, gender equality, and sustainable cities and human settlements; and for the protection and sustainable use of terrestrial ecosystems.  Secure tenure rights to land are strongly linked to peace and security, social cohesion, conservation of natural resources and mitigation of the negative impact of climate change. Secure tenure rights to land and natural resources are important for poor populations to access and sustain their livelihoods. Without secure land tenure, families and communities are vulnerable to expropriations and face numerous challenges to access financial resources, markets and other services.

Agreement on SDGs land indicator on tenure security enables countries to monitor and report progress in increasing the proportion of total adult population with secure tenure rights to land. The indicators underscore the importance of legitimate tenure rights to land for both men and women, whether documented and perceived, promoting the ‘continuum of land rights’ approach to tenure security. Indicator 1.4.2 is also connected to other SDG indicators: Goal 5, indicator 5.a.1 (agricultural people/land) and 5.a.2 (legal framework); Goal 11 (indicator 11 1.1, 11.3.1 and 11.7.1 on urban informality) and Goal 15 (Indicator 15.1.1 and 15.3.1 on sustainable land use and degradation).

Monitoring and reporting of indicator 1.4.2 is expected to contribute to progressive implementation of various important guidelines and frameworks such as the VGGTs, AU -LPI, Agenda 2063 and the New Urban Agenda. Reporting on global land indicators can strengthen country-level data generation systems and support global scale monitoring and coordination.

The IAEG-SDGs has tasked UN-Habitat and World Bank as custodian agencies for indicator 1.4.2 which is classified under Tier III because it has no internationally established methodology for countries to collect data regularly.

Acknowledging that this indicator requires both survey and administrative land data, the outcome of this EGM will serve as a great milestone towards a harmonized and comparable land survey data.  An IAEG-SDGs meeting scheduled for October 2017 is expected to provide a major opportunity for UN Habitat and World Bank to request for an upgrade of this indicator from Tier III to II and potentially Tier I in 2018. GLII partners including members of the CSOs, and members of the GDWGL also requested custodian agencies to expedite the processes needed to secure upgrading of land indicators from Tier III to II and I respectively. Read more about the Work Plans of Tier III Indicators here.

STDM manual available in 4 languages!
Save the Date: Dialogue on Responsible Investments in Land: Perspectives from Tanzania and globally