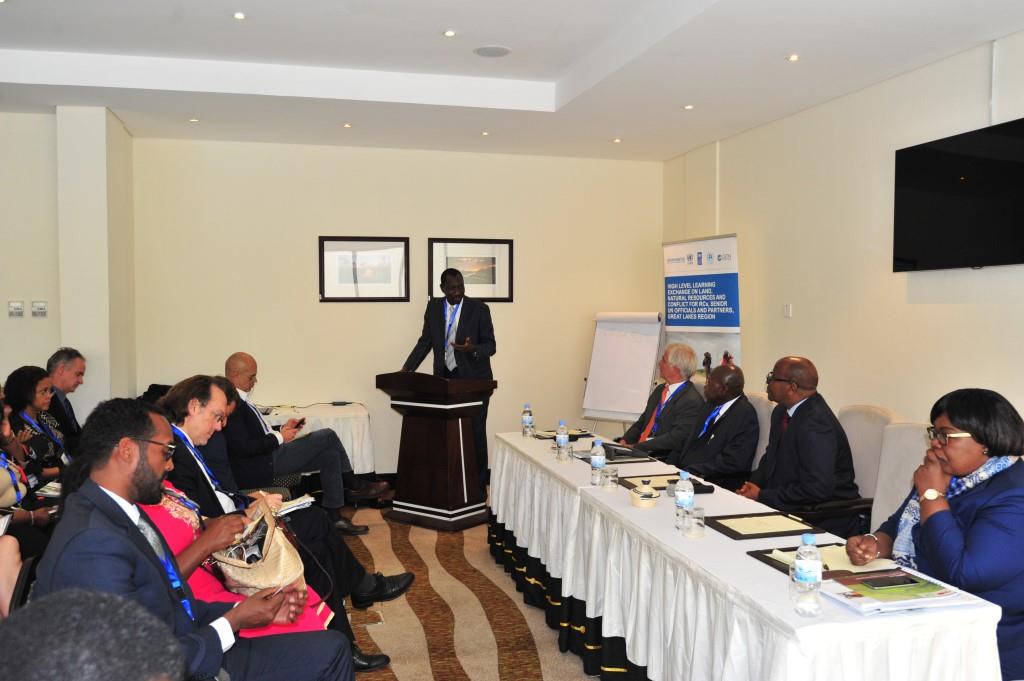 The overall aim of the event was to capacitate senior UN officials in the GLR to attain the land and natural resources outcomes outlined in the Nairobi Declaration and Great Lakes UNCTs Strategic Framework 2016-17. Specifically, the learning event sought to improve the participants’ understanding of key concepts, approaches and strategies to address land, conflict and natural resources issues; give the participants a better appreciation of how land and natural resources are linked to conflicts and how these could be addressed to contribute to peace and stability; paint a clearer picture of priority challenges and opportunities at country level; and, give a better understanding on how to do root cause analysis and planning on land, natural resources and conflict at both country and regional levels.

The ensuing discussions at the successful learning exchange demonstrated the need for land interventions to be further coordinated and mainstreamed in the design and programming by UN agencies.

The participants corroborated a broad interest in land and natural resource issues and practical examples of collaboration and cooperation were demonstrated. This was followed by a very informative discussion on UN Frameworks and Guidelines governing land, natural resources and conflict. There was consensus that such frameworks are central in guiding the actions of UN agencies, with participants agreeing to amplify their efforts in operationalizing such global instruments. The meeting recommended building the capacities of national governments and non-state players in implementing the said global instruments.

There was consensus thatUN Frameworks and Guidelines governing land, natural resources and conflict are central in guiding the actions of UN agencies

The discussion on Tools, Methods and Approaches generated knowledge on the ‘what’ and the ‘how’ for UN agencies’ involvement in the work of land and natural resources conflicts.

Ultimately, there was a vivid demonstration of the linkages between land degradation, economic development and the management of land and natural resources conflicts. It was noted that even interventions in non-conflict situations – covering broad areas such as energy based development interventions (biogas, mini-hydro-power stations) and value addition in natural resource exploitation and agricultural production – provide excellent models for customization and implementation in addressing the root causes of conflicts.

A diagnostic Tool on the Root Cause Analysis of Land and Natural Resource Conflicts was also demonstrated at the meeting. Its relevance was confirmed and recommendations were given for its further development and improvement.

In the final analysis, a participant described the learning event as ‘meticulously planned, with excellent facilitation, and rich in terms of substance’ concluding that the ‘event itself was time well spent’ on the part of workshop conveners and workshop participants. The next stages include the broadening of the partnerships to work on land, natural resources and conflict; the replication of the event in selected country level locations in the Great Lakes Region and the further development of the area of work in term of programming and fundraising, both at regional and country level.