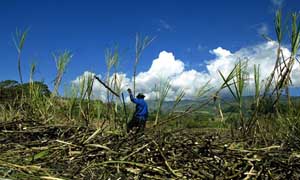 Washington D.C., 9 April 2014 (ECA) – The Land Policy Initiative (LPI) co-sponsored and participated in the 2014 annual World Bank Conference on Land and Poverty, held in Washington D.C., between 24 and 28 March 2014, under the theme “Integrating Land Governance into the Post-2015 Agenda: Harnessing Synergies for Implementation and Monitoring Impact.”

The LPI participated in a session co-organized by the United Nations regional economic commissions, and organized a dedicated session that showcased outcomes of collaborative efforts in support of the implementation of the African Union Declaration on land. The LPI also organized an advocacy event and a Development Partners Meeting, aimed at raising awareness and enhancing partnerships for the implementation of Africa’s land agenda through building synergies and alignment of initiatives at country level operations.

In a session titled “Regional Initiatives to Improve Land Governance”, Dr. Joan Kagwanja, Chief of the LPI, provided an overview of ECA’s experience in Africa. The presentation also included the highlights of land governance challenges in Africa, the work done by the LPI to mobilize the continent towards a land agenda, progress made in implementing the AU Declaration on Land, and the monitoring framework which can inform the debate on a land indicator in the context of the post-MDG agenda.

The “Land Policy Initiative: Advances made and next steps” session was chaired by the Minister of Land, Housing and Urban Development of Uganda, Mr. Daudi Migereko, and included paper presentations by representatives of LPI-supported projects, the Pan-African Parliament (PAP), the Economic Community of West Africans States (ECOWAS), the Intergovernmental Authority on Development (IGAD), and a joint presentation by the Swiss Agency for Development and Cooperation (SDC) and the Rural Code of Niger. The presentations were successful in sharing initiatives at national and regional levels, highlighting lessons learnt, best practices, and partnerships to promote land policy and governance in Africa.

The LPI advocacy event included a statement by Ms. Aisa Kirabo Kacyira, Deputy Executive Director and Assistant Secretary-General for UN-Habitat, who expressed her appreciation for the ongoing efforts of African countries in developing and implementing sound land policies. His Excellency Mr. Robert Mbwinga Bila, Minister of Lands of the Democratic Republic of Congo, and Hon. Mwansa Kapeya, Minister of Lands of the Republic of Zambia provided brief overviews of the ongoing land policy processes in their respective countries. Representatives of other LPI partner institutions, including the Food and Agriculture Organization of the United Nations (FAO), the International Fund for Agricultural Development (IFAD), and the European Union Commission (EUC), pledged support to the land agenda in Africa.

The second LPI Development Partners Meeting, building on the first event held in October 2013 in Addis Ababa, provided an opportunity to learn from the experience of the Global Donor Platform through presentations. The meeting also offered LPI the opportunity to update partners on key initiatives and partnerships to better align land policy programmes at regional and country levels. LPI leadership in improving partner engagement was appreciated during discussions regarding land policy development in Zambia, and the integration of land governance in the Comprehensive Africa Agriculture Development Programme (CAADP) agenda. The LPI announced the upcoming, inaugural Biennial Conference on Land Policy, to which partners expressed their interest and support.

The LPI held additional, bilateral meetings with stakeholders and partners such as the FAO, IFAD, UN-Habitat, the International Food Policy Research Institute (IFPRI), and the United States Agency for International Development (USAID). The LPI Chief, Dr. Joan Kagwanja, along with Mr. Daudi Migereko, Minister of Lands of Uganda, were special guests on the Voice of America talk show “Straight Talk Africa” with the theme “Reducing Poverty through Land Reform” (see http://www.voanews.com/media/video/straight-talk-africa/1879955.html?z=1434&zp=1)