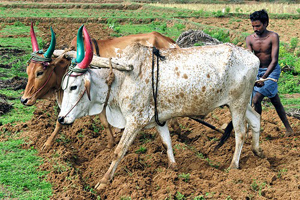 This post was originally published on USAID’s Land Tenure and Property Rights Portal. There is growing recognition that India cannot solve many of its critical development challenges if it doesn’t help the 20 million landless rural families and the millions more who lack legal rights to the land they till. This recognition has sparked a flurry of promising state-level programs and a historic new national bill that aims to eliminate rural landlessness and land insecurity. These new programs are now recognized for their potential to dramatically reduce landlessness, hunger, poverty, and land insecurity in rural India and hold significant potential in countries like Pakistan, Indonesia, Bangladesh and Myanmar, to name a few.

The draft National Rural Homestead Bill, 2013, now awaits formal approval and adoption. The proposed Bill envisions a democratic and market-friendly land reform program that would provide India’s 20 million landless families with tennis court-sized plots of land. Such a program would require less than one-half of one percent of the roughly 400 million acres of India’s present arable land to end landlessness.

This national program builds off experience with successful homestead land allocation in the states of West Bengal (funded by the Bill & Melinda Gates Foundation), Karnataka and Odisha. Research shows that these micro plots of about one-tenth an acre can provide significant economic and nutritional benefits to landless families by providing them sufficient space to grow food, build a house, keep small livestock, and develop other livelihood options. Not to mention the other tangible benefits: security, a stake in the future, opportunity, incentive, access to credit, and a host of government poverty alleviation programs.

Such land can be sourced through a combination of purchase on the private market and allocation of existing government land. Already more than 250,000 families have benefited through the state programs. These families now have the incentive and opportunity to climb out of extreme poverty. And, just as importantly, they are building a positive relationship with their government.

Photo courtesy of: meetinglunch.wordpress.com.
Click here for the full story.