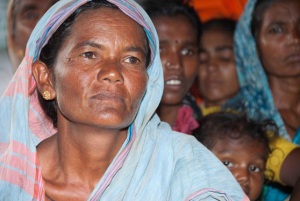 It was like searching for that proverbial needle in a haystack.

From September through December 2012, my colleagues and I searched three Indian states looking for 120 women in any district who had inherited farmland from their parents or their husbands in the last eight years.

We wanted to interview these women as part of a study to determine how they exercised their rights to inherit land and what challenges they faced.

Apparently the challenges were significant.

Even though we searched an area with a population that included nearly one million rural women, we couldn’t find 120 such women.

We looked in six districts in Andhra Pradesh, Bihar, and Madhya Pradesh. In one district we found five women who had recently inherited their land; in another twenty. But we couldn’t find enough to give us the sample size we needed for our study.

As my colleagues and I searched the countryside, we saw no shortage of women laboring in the fields. Indeed, across India women are hunched over the ground planting, weeding, fertilizing, and harvesting in unprecedented numbers. Data across many states makes clear that Indian women do more than half the agricultural labor. And in orchards, cotton, and ground nut cultivation, they do the majority. More than 80 percent of rural women in India work in agriculture.

But they don’t own the land they depend on.

This is not just a matter of a piece of paper awarding them ownership rights. It is about power, security, equality, and opportunity.

Without land titled in their names, women have no proof of residency and can’t access institutional credit, such as bank loans. They also can’t take advantage of agricultural extension programs, such as government offers of subsidized seeds and fertilizers.

Photo courtesy of Landesa. Click here to find out more

Landesa: A Revolution from the Ground Up
GLTN Congratulates FIG for a Job Well Done