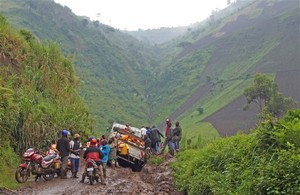 KINSATI, 29 January 2013 (IRIN) – Shukuru Rudahunga keeps a wary eye on the steep slope above her as she weeds her patch of sorghum in the eastern province of North Kivu, in the Democratic Republic of Congo (DRC); she knows the risks are deadly.

Landslides have killed several people in nearby Kinsati, 40km from the city of Goma.  “If it’s been raining and I see the earth breaking up, I stop working and get off the hillside,” she told IRIN.

Erosion also washes away seeds, plants and soil fertility. Villagers know that to protect against soil loss, they should fallow the steeper slopes after just a few seasons.  But “we don’t do it because there isn’t enough land”, Shukuru said.

The over-cultivation has also resulted in plummeting yields. Teacher Gabriel Hanyurwa remembers that, in the 1980s, farmers harvested 20 sacks of beans per hectare on land that now yields only six to eight sacks. The land shortage results in part from population growth and in part from the expansion of cattle ranches.  “Since the ranchers brought their cattle here, we haven’t had enough fields,” Hanyurwa said.

“The ranchers prefer to put their cattle in the same places that we want to cultivate,” another villager, Therese Tusali, said. In a 2010 paper, ‘Land, Power and Identity: Roots of violent conflict in Eastern DRC’, author Chris Huggins noted that recent decades have seen “massive alienation of land held under custom” in the Kivus in favour of cattle ranchers. Residents in Kinsati and elsewhere have had little say in this process.