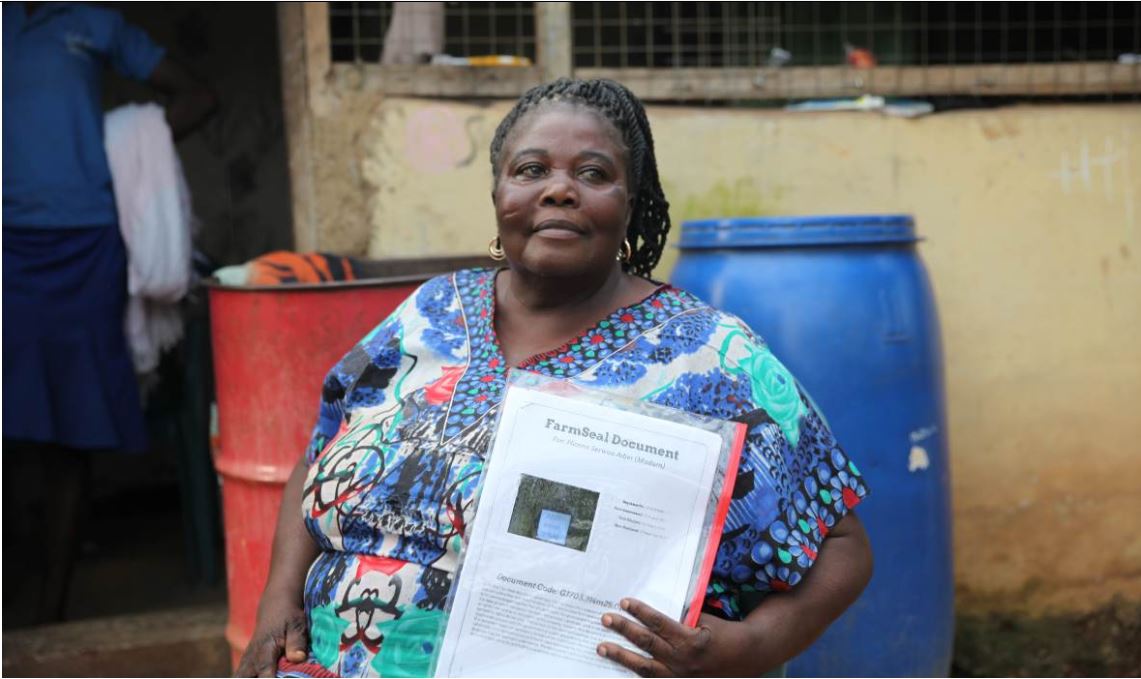 By Nellie Peyton. This article was originally published on PLACE at this link

The industry regulator has encouraged farmers to clear away old trees but under traditional agreements, a farmer’s land rights are tied to the crops he is growing

NYAME NNAE, Ghana – Since Emmanuel Agyekum took over a decade ago as chief of Nyame Nnae, a poor cocoa farming village in western Ghana, people’s incomes have fallen and his worries have increased. The cocoa trees planted behind wood-plank houses are getting old, and produce only a fraction of what they used to. Last year, money ran out between harvest seasons and people struggled to buy food. “The cocoa trees are dying and it is a worry to us all,” said Agyekum, sitting in a plastic chair in a dirt yard. Cocoa yields are declining across Ghana, the world’s second-biggest producer after neighbouring Ivory Coast, where about 800,000 family farmers supply cocoa beans to chocolate companies such as Hershey’s and Nestle, according to the government.

The industry regulator, Cocobod, has encouraged farmers to clear away old trees and replant. But under the traditional agreements that govern rural land use, a farmer’s land rights are tied to the crops he is growing. Cutting down the cocoa can mean losing your lease, said Paul Macek of the World Cocoa Foundation (WCF), which represents over 100 of the biggest companies. “Land tenure is a risk for any smallholder farmer,” he told the Thomson Reuters Foundation.

“As a result of the customary arrangements, sharecroppers are very reluctant to make investments in rehabilitating old farms. Even if the situation is desperate, they really have no incentive to do that.”

In Nyame Nnae, The Hershey Company, cocoa supplier ECOM and the U.S. Agency for International Development (USAID) tested a possible solution. Working with lawyers, tech companies and local chiefs, they mapped farms and documented customary land agreements that had never been put into writing before. “What we found is that just the fact of documentation helped farmers increase their sense of security over that land,” said Robert O’Sullivan of U.S.-based non-profit Winrock International, which helped design the pilot project. When they do not fear losing the land, farmers are more likely to make long-term investments to increase yields, he said.

Hannah Adjei does not know what the document says, but she clutches it tightly in a plastic envelope in the rain. “If anybody comes and tries to take my land from me, this will help me prove that the land is mine,” said the 54-year-old, who received a customary land title through the pilot project. Like most cocoa farmers in Nyame Nnae, Adjei is not a native of the region. According to the document, the land she farms was a gift from her husband, who inherited it from his father, who obtained it through an agreement with the late chief of the district. North of Ghana’s cocoa-growing regions, the landscape changes from green to brown. For decades, people from this poorer zone have migrated south and made deals with locals who owned land but required labour.

In the typical arrangement known as “Abunu”, a migrant farmer plants crops on uncultivated land and, when the crops mature, divides the proceeds with the landowner. But this scheme disadvantages farmers in the long run, said John Bugri, a land economist. Migrants can toil for generations only to get a portion of the profits and still lose their farm at any time, Bugri said.

“They (landowners) see the people who come and farm the land for them as a cheap source of labour,” he added. “If you are a tenant farmer who’s saying, ‘Let’s document the rights’, you are the one more likely to be booted out.”

Ghana’s Cocobod estimates that 40 percent of the country’s crop needs replanting. It started its own farm rehabilitation programme this month, aiming to more than double productivity in the next 10 years, said Cocobod spokesman Noah Amenyah. The government hopes raising yields – and therefore incomes – will convince farmers to stay in the sector at a time when many are abandoning cocoa for illegal gold mines and rubber plantations, said Amenyah.

“Land tenure is a significant problem,” he told the Thomson Reuters Foundation. Cocobod will pay landowners to allow farmers to cut old cocoa without losing tenancy, he said.  Winrock and partners took a different approach in their pilot – holding discussions and trainings to persuade landowners to allow replanting. Sitting in silver-backed chairs in their rustic town palace, the district chiefs of Asankragua have the final say over land decisions in Nyame Nnae and some 60 other villages.

Under customary law, land held by tenants normally reverts back to the landowner if the crops are removed, allowing him to negotiate a better deal or use it for something else, said Kwame Appiah, secretary of the chiefs. But through the pilot, chiefs and landowners were persuaded that allowing farmers to replant would bring in more money, he said. The land tenure documents drawn up during the project by Ghanaian startup Meridia do not meet the requirements of land deeds under formal, statutory law, said O’Sullivan of Winrock.

They enshrine traditional, or customary law, which is suitable for use in rural settings, he explained. They also provide maps in places that have never had one – which prevents conflicts over property boundaries, the chiefs said.

Daniel Ntodi steps around knee-high cocoa seedlings interspersed with tree stumps in a wooded clearing. He replanted last year, after a crop disease reduced his yearly yield from 20-25 bags of cocoa beans to less than 10. Having a land tenure document motivated him to replant the farm, but he is not sure he could have afforded to do it on his own.  Farmers have difficulty accessing credit in Ghana, and most do not have the cash to pay for new seedlings – much less survive the three to four years it will take them to start producing, said cocoa supplier ECOM.

In the Nyame Nnae project, ECOM paid for the rehabilitation and planted plantains and maize among the cocoa. The plan is for farmers to sell the food crops to pay back the investment and sustain themselves until the cocoa matures, said ECOM programme manager Bismark Appiah-Kubi.

“It’s still a work in progress,” he said, adding that the company is working on ways to scale up the model. The pilot project in Nyame Nnae saw 190 farms mapped and documented and 71 rehabilitated over a period of 11 months. Meridia has done mapping and registration for thousands of farmers since it started three years ago and is in talks with companies to do more, said managing director Joseph Okyere.

The Asankragua chiefs have requested an extension of the pilot in their district, and farmers said they expect to see record harvests when the new trees mature. “I am really happy about it because it will help me get my daily bread and look after my children,” Ntodi said.

Securing Land Tenure for a young fish farmer in Chamuka, Zambia
Landesa launches a Resource Platform for Responsible Investments in Property and Land