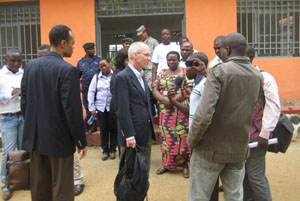 On January 7, 2014, U.S. Ambassador James C. Swan, Embassy representatives, and a USAID representative visited the territory of Rutshuru in North Kivu, which was recently freed from M23 rebel movement occupation. During his visit, the Ambassador met with local authorities, community leaders and the land administration to emphasize the importance of restoring state authority in the territory of Rutshuru for peace, reconciliation, and development. Mr. Justin Mukwanya, Administrator of Rutshuru Territory acknowledged that land disputes are an important problem, which impede the return of internal displaced persons and refugees, community recovery, peace, and development in North Kivu.

Ambassador James C. Swan recognized the long-term importance of land for the future and the need to tackle land disputes and related issues for returns, peace, socio-economic development, and security. Since it is not just a legal problem, creativity and dialogue will be required to address it.

USAID has been supporting the UN-Habitat land program in DR Congo since 2011. The major goal of the program is to contribute to peace and stability in DR Congo through land mediation and to support a comprehensive land reform process. In 2013, 215 land disputes have been registered within the land mediation program and 118 cases have been successfully mitigated through mediation; and a land reform strategic is already developed with the support of UN-Habitat.